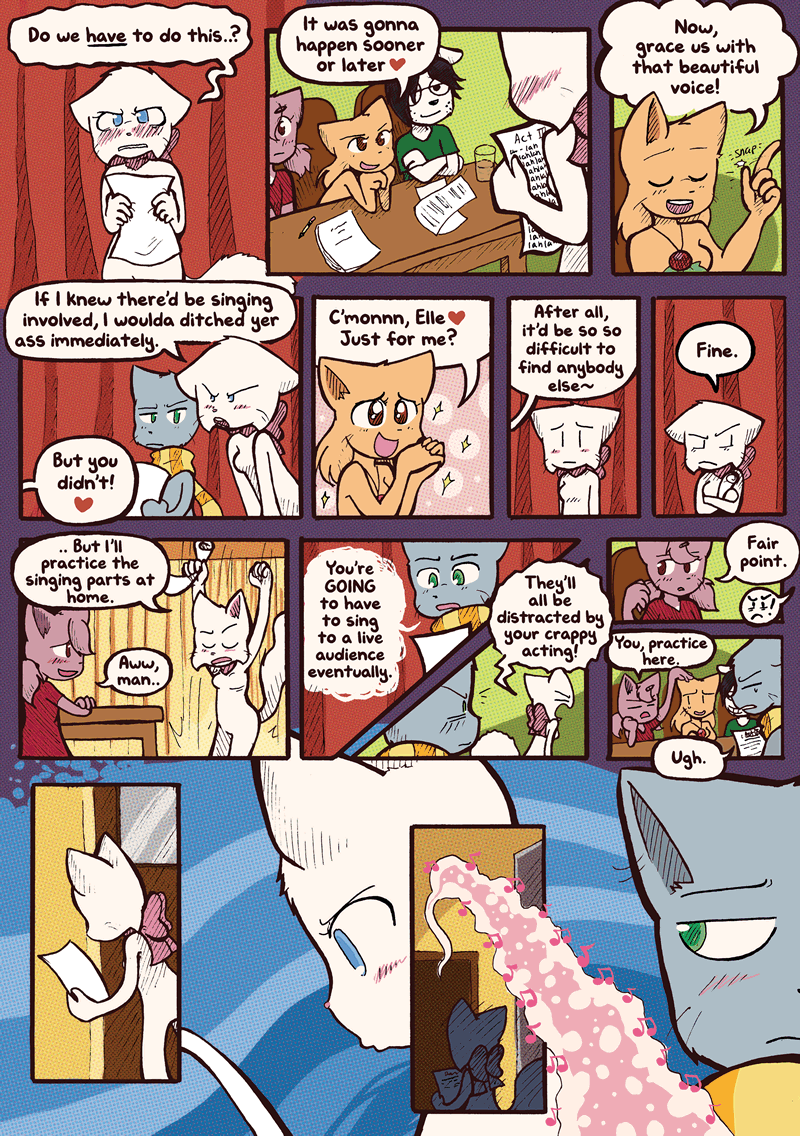 For those coming back to look at this chapter, you might be surprised by the HUGE change in, uhh, everything!

The basic gist is that Another Path, the previous chapter in this 59 slot, was an indulgent “what if” scenario that had no real place in the canon — it confused people over whether Another Shoulder happened the way it did and served better as a goofy side comic before we had a place to put them (now, it’s our member club, Bittersweet Club International.) So I wanted to get rid of it! I considered redrawing it or making a chapter inspired by it, but I also thought the Volume Two book we produced in 2012 had a SUPER VALUABLE BONUS CHAPTER in Mother’s Day. And that’s why it’s the new chapter 59!

Watch Mike get mad at Lucy but ****ing forgetting that Lucy has a blunt abrasive personality… she clearly has no interest in some of her old friends anymore and kinda for good reasons… Same thing with Abbey, Daisy kept defending one person and never looking from the perspective from the other person. “Mikey’s right Lucy! You bully him non-stop!” “Paulo did nothing wrong! Stop being mean to him!” Like????????????

Oh, how do I love seeing Mike getting a middle finger shown that he so rightfully deserves. What’s wrong Mikey? Sad that Lucy isn’t gonna forgive you no matter what? Well suck it down buddy and keep suckin’ till you choke.

rereading bittersweet candy bowl really gets the ol’ think ball rolling
i don’t rly like mike (personally- I don’t think he is inherently a bad person, as with everyone) but obviously he didn’t deserve what was happening- his outburst was unusual and uncomfortable especially after lucy was actively trying to get better and support him. still, being pressured by his group to date her and her just standing by is :/ but she was trying, and to go at the weaknesses he knew due to her reliance on him is just repugnant. he didn’t have to go for her insecurities the way he did. if he had pent up frustration, ripping his obviously emotionally unstable friend apart is NOT the way to handle it. doesn’t excuse Lucy’s behavior, and I’m concerned in the newer chapters that she hasn’t learned her lesson-
tho the avoiding her friends and trying to find people to […] That’s a pretty mean face Lucy’s giving Daisy. I don’t think you need to drill it in Lucy, the damage was already done. Daisy knows she’s done wrong.
It felt like a bit of a double entourage when I first saw the new page, my original first thought was Lucy was referring to Abbey’s attempts to control who Daisy could be friends with. But, Lucy here is referring back to what she told Paulo back in ‘After you’.