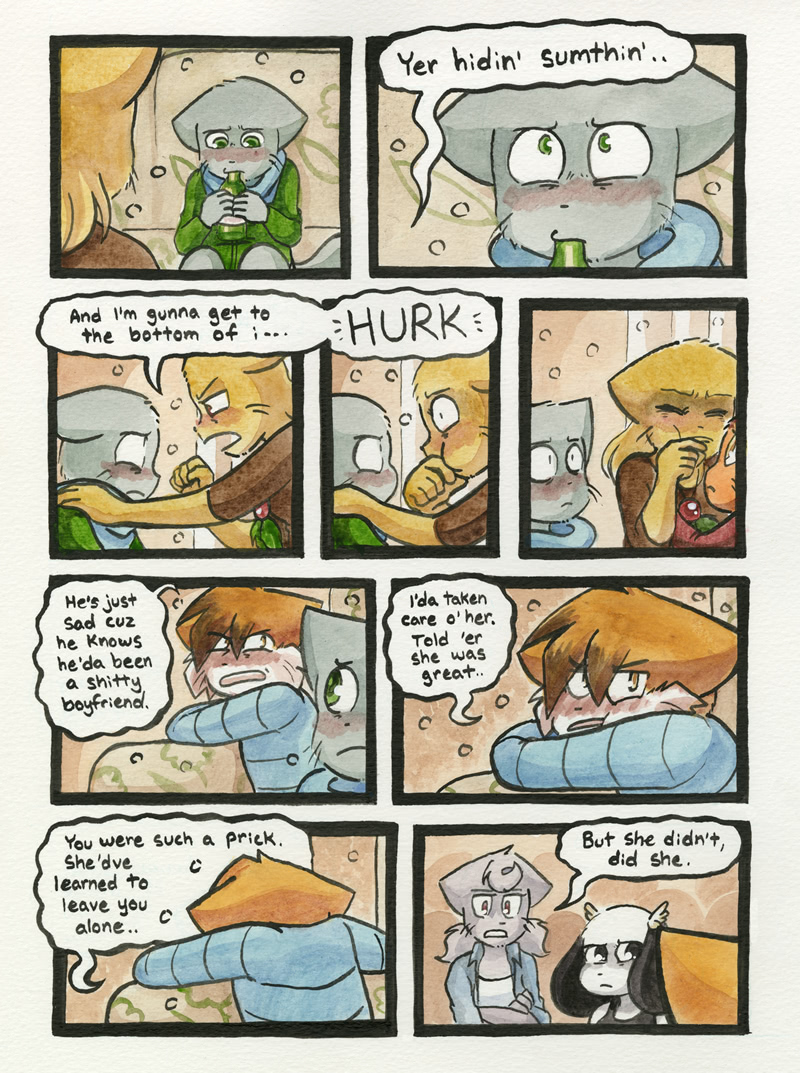 Veronica: It’s a good thing Sue’s all sick from being drunk because she would otherwise be getting to the VERY bottom of this.

also.. uhh.. paulo, did you forget whose birthday party it is..

If Mike somehow gets through this whole chapter without having to fess us because people got off his back when Sue left my head is going to explode.

Also, I know it’s Rachel’s party and they really shouldn’t be wrecking it with their drama, but Rachel went after Paulo KNOWING he was pining for Lucy. She really shouldn’t be surprised when she can’t magically make Paulo drop Lucy for her. I don’t really know what their relationship with one another is, but from what I’ve seen it seems to be more Rachel trying to support and console Paulo (incidentally, the best way she knows how to do that is through sex). I think they just say their relationship is “complicated” because it’s probably easier than for Paulo to admit he needs help and support. Where else would he get that? He doesn’t want to look weak to Mike, Abbey wouldn’t let him near Daisy, Jazz is an obvious no, and he doesn’t seem close enough to Sue (or Amaya, I suppose) to go to them. Rachel and him have some chemistry together, and she’s also unbiased and the gentlest of his friends, so out of the whole group, Rachel’s the best to give him the support he needs, added to the matter is that she genuinely cares about him.

So, if him and Rachel do have some kind of relationship going on, I don’t think it’s romantic. Jess already told Paulo that Rachel wouldn’t want to marry a cat. I think Rachel looks more concerned that Paulo is still hurting so much after her trying to console him.

I really hope Mike presents his case and his friends realize that they were just as much a problem and reason his and Lucy’s friendship deteriorated. If everyone jumps on him without even considering his side and starts making him to be the sole bad guy of the situation, it’ll just prove that these people never really cared for Mike to begin with.

I’m not saying that they should forgive Mike just like that, but putting sole blame on him and pressuring him would be dickish however you look at it. I just want them to stop and think about it all.

Not really LH, Abusive relationships and mentalities about the subject can start young. Hell there was a big push a while back to get parents to stop teaching their kids that ol’ chestnut of “if a boy pulls your hair it just means he likes you”. It was believed that it does early on teach kids an attitude that physical stuff like that is okay in a relationship. Thus as the kid grows up you have one side growing up thinking it’s okay to hit their significant other and the other thinking that being hit is a part of the relationship. This can continue into adulthood if no one teaches the kid the right thing, this leads into abusive adult relationships (Like Abbey’s parents). Granted Mike and Lucy are an inverse of the usual situation but it still remains that it’s basically the same development scale. Lucy never got told that hitting her friends is wrong so she developed learning it’s okay. Mike is the inverse, he grew up learning that being hit was perfectly fine. So growing up he didn’t see it for what it was. So you end up with them in high school and Sandy shocking his system by telling him something he should have found out long ago.