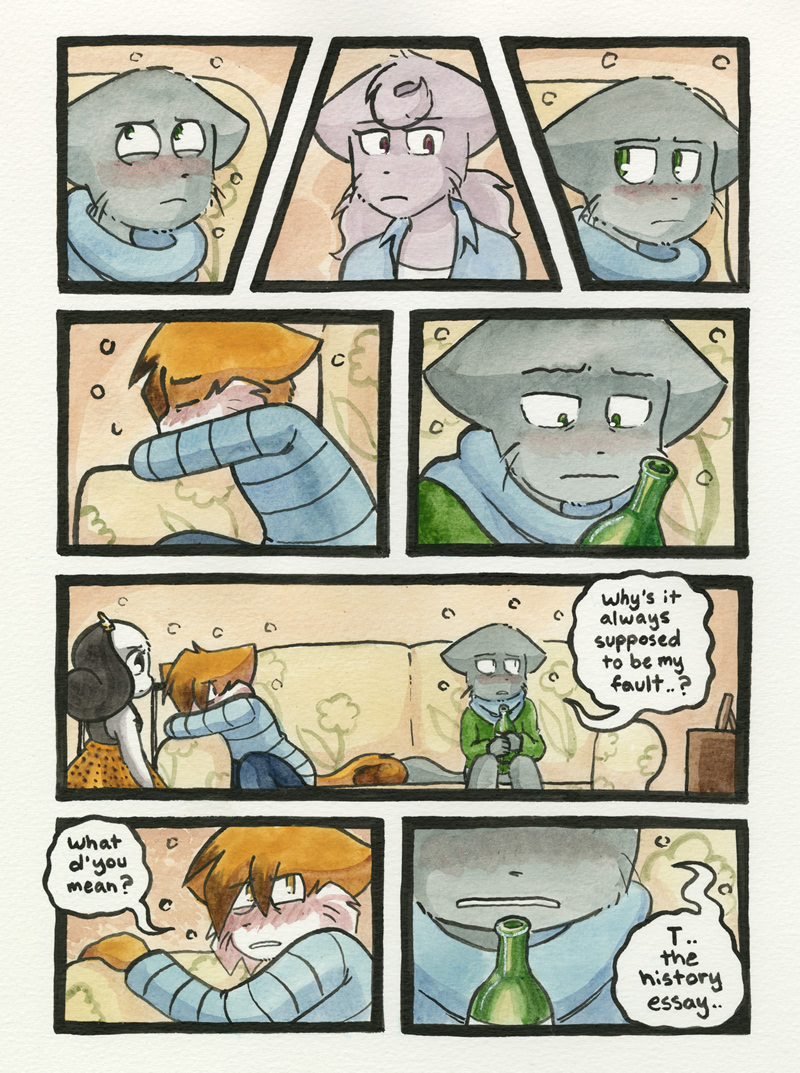 Veronica: what’s all this then

I agree with you completely save for the topic of their friends; true they acted a bit biased around Lucy but that was because Mike TAUGHT them to be that way. Back in middle school they all realized Lucy’s behavior was wrong and they didn’t really like her because of it and even teased her, but Mike was head over heels for her and understood Lucy differently and even reprimanded them for it (like the chapter where they got lost). That is basically years of conditioning right there. Is it wrong? Yes, but when they called it out Mike brushed them off and that was his own doing…. now they just consider it “normal”.

People have been accusing buchanen_neket, Allsmiles and others as being biased and being Mike siders. But, in a way, aren’t the rest of the people who are attacking Mike being biased too by only siding with Lucy? There are some who have good points to negate buchanen’s opinions but some are just rude and harsh. Some people just don’t have anything logical to say to negate their arguments so they themselves try to attack people, like buchanen_necket, by joking about his comments, calling his posts rubish or even telling buchanen to shut up. I find both Mike and Lucy at fault. Even though Mike’s response to Lucy’s confession was irrational, there was reason why it was. Sometimes when a person has been hurt for too long, they just don’t know what to do, how to stop it in a calm way. sometimes, to relieve themselves of that pain, they act out. People who have been saying that that’s not true know that it truly is. Everyone acts out when their angry, some are minor (little yelling or just try to ignore the pain)and some are major like Mike. You can’t assume that everyone will react the same way

Wow, I wasn’t aware that this page attracted so many comments. I’ve had a busy weekend coping with (and responding to) the news that my immigration application is delayed, and helping my mother move house. I hope some of you will see my responses here.

If you’re upset by seeing Mike being criticised, then yes, these next few pages may upset you. But if it helps to know, both your authors are morally ambivalent about the Mike and Lucy thing and we try to make sure that shows through. Remember, no character is a mouthpiece, and all characters are pretty flawed.

FWIW I don’t think your commentary is offensive and I appreciate your posts. I think people here shouldn’t be so quick to pounce on generally thoughtful posters. It’s kind of disappointing, because this kind of thing rubs off on us, and the rest of the internet assumes we feel the same and can’t accept criticism. It is not true.

By all means, yell at people who are pointlessly abusive, but don’t get upset when somebody expresses strong emotions backed up by some reasonable observations.

I don’t think there’s a single time we’ve ever chosen to insert artificial suspense in the comic. It has always just been coincident with whatever seems like the best way to pace a scene or subplot properly.

The quote from Veronica about “hating the members bringing up old shit” was not an ongoing forum problem, it was something that occurred when I announced the forum be closed. We had a flood of people who had previously been banned (or made declarations to leave forever when their friends were banned) coming back to offer commentary on how badly the forum was run. Veronica and I feel those people are utterly awful for reasons not worth going into, and it frustrated Veronica to see them coming back to stretch the real reason the forum was closed (a lack of purpose and an alternative, friendlier imageboard idea we later chose not to implement) into a sense of vindication.

Some BCB fans are definitely stupid and annoying. But that’s true of human beings. The forums weren’t full of annoying people, but there was an unfortunate group of them that evolved in a kiddy pool we really never should have let form. Again, I’m a little upset that this is misremembered and spread around the internet as if we’re both hostile to all readers, or as if those people were people who chose to criticise BCB and we just couldn’t handle it. It was more a matter of us trying to remove extremely unpleasant people who were upsetting everybody.

Anyway, people will remember it as us getting butthurt and there’s nothing I can do about that. For that reason, I am glad the forum’s gone and will fade from memory. I could explain and explain to no avail, but the bottom line is that it wasn’t worth running and the surge of posters with sour grapes in that last thread provided us with the final nail in the coffin, not the reason to close it in the first place.

I’m sorry you feel that way about me. I think if you got to know me better you’d like me more.

I definitely have particular and unusual standards as to what kind of shitposting is rude or unnecessary, and what kind is amusing and worthwhile, but I don’t think it falls down the line of “who is my friend and who is not”. It’s like assuming from this comment section that Veronica and I are anti-critique — not true at all, but the story can be reduced to that in your mind especially if other people assure you it’s the case.

I do accept that the laissez-faire approach was wrong, though. If I had been careful from the start then these communities wouldn’t have formed, and there wouldn’t be such a complex story of “SuitCase vs. the world” to reduce and misremember. I regret it. I’m working to fix it with these page comments, too. It is a principled approach that does not scale.

You are welcome to talk to me about this stuff in IRC or email if you think I’m worth reasoning with, or if you think I’m just scapegoating again to avoid admitting my own culpability in all the conflict. I feel sad that people think this way about me and I really wish I could at least have the chance to see if my arguments stand up when challenged - I’m an intrinsically confident person and you may have something to say that comes from a perspective I’ve never considered. But I understand and accept that you might not care that much, and so life will go on.