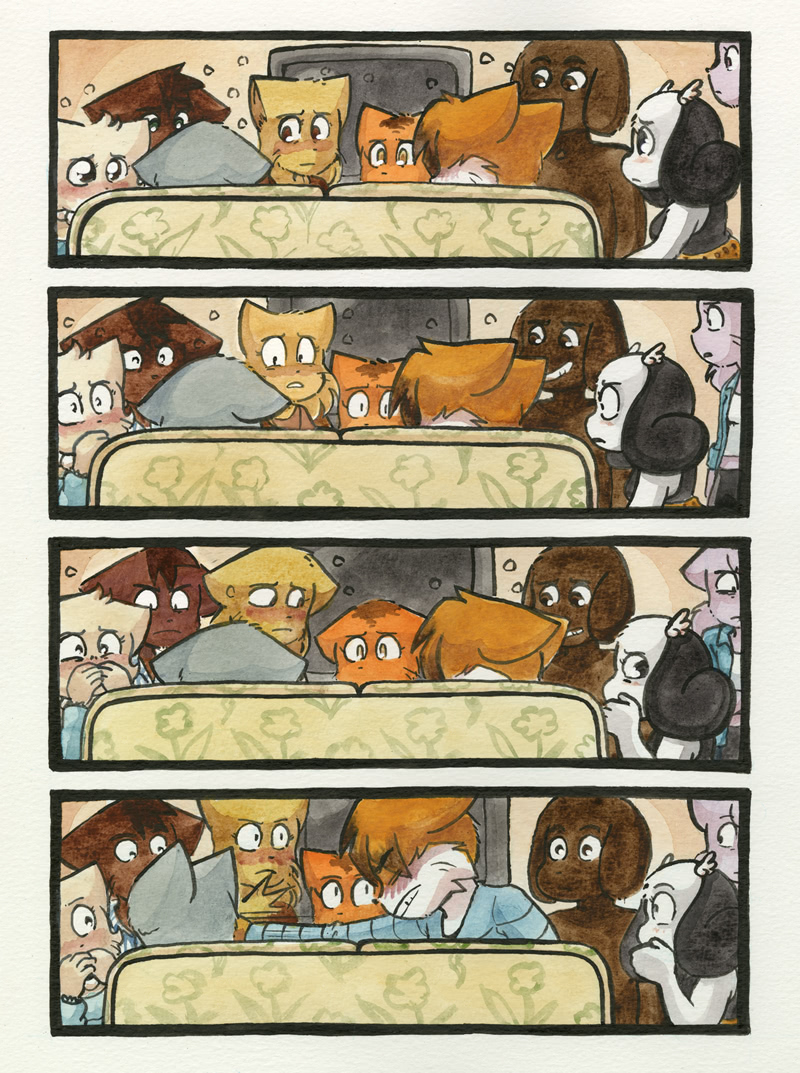 @Erinaceus I think this is meant to be Mike telling everyone what he did without wasting too many pages just retelling the story we already know.

@Taeshi
I REALLY like how you didn’t use words to make Mike explain the situation, and rather explained it through the emotions from the others. I honestly feel bad for Mike at this point; while this situation was inevitable given his involvement in the entire affair, it still is sad to see him have to go through it when he’s already realized what he did was wrong. I’m not saying he should get away scot-free or anything, just that it’s still a rather tragic thing to see.

However, while Abbey and Paulo are absolutely furious, I noticed the others are more shocked and sad than actually angry at Mike. Maybe this gives a ray of hope that they won’t try to ostracize Mike after hearing his story, and realize that he’s already massively regretting his actions. After all, if they ostracize him now, that’d make them no better than he was back in December… but then again, they ARE teenagers, so it’s easy to imagine that they’d not consider that aspect.

@buchanen_neket We’ve had 79 chapters before this one to get his viewpoint and I think it’s been pretty well covered even in this one, Paulo is in love with Lucy and upon hearing what Mike did, Paulo is ready to place full blame for her disappearance on him and express that as only a drunk, love-sick teenager can, with his fist. some people will sympathize with that and I can certainly understand it myself, but I don’t think these reactions needed to be dragged on, Taeshi did a great job of it already with the expressions on thei faces of those present. From what I know of the characters, here’s their thoughts:
Daisy is shocked at what Mike said and sad about what happened to Lucy as her good friend, but she is mad at Paulo at the end because, after all, Mikie was her first real crush.
Abbey is upset because of how closely Mike’s story reflects his father’s and when he learns that Mike is at least partly responsible, he’s furious. When Paulo makes the first move and hits him, he’s a little taken aback.
Sue is surprised that gentle, sweet Mike could say something like that to Lucy and when it gets really awkward she looks to Amaya for support. Paulo lashes out at Mike and, as someone who has broken up/avoided fights several times in the past Sue is upset.
Amaya is a little harder to gauge because she is so quiet, but she’s listening intently to Mike’s story and is surprised when it is interrupted.
David doesn’t look like he’s 100% paying attention at the beginning but slaps on a slightly awkward smile partway through, only to have it fade as the story gets less funny. He snaps to attention though when his good buddy Paulo springs into action.
Rachel doesn’t even know Mike and Lucy all to well but it looks like she can at least sympathize with how horrible of a story that it is, and she can feel Paulo’s pain a little in panel 3, but she was not expecting him to hit Mike towards the end.
Jessica is a little lost in thought by Panel 3 as Mike is confirming what she may have already suspected from the last page, but gets brought out of her own head when Paulo makes contact.