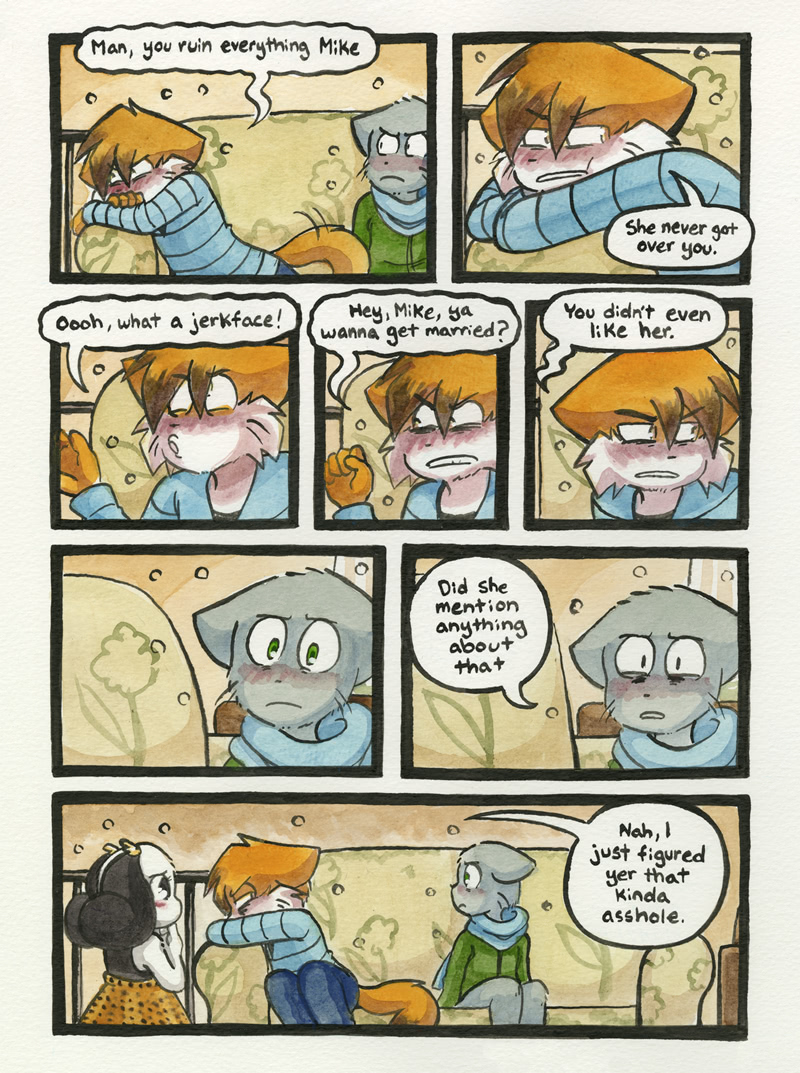 Paulo being focused on someone else despite Rachel’s interest

I know it’s different, but Paulo, you goof.

@buchanen_neket: I’m a good mediator, let me mediate for ya!

By “Mike beat her up nearly as often as she did,” you’re right that this is incorrect….physically. However, Lucy beat Mike up physically as often as Mike beat Lucy up emotionally. I believe that’s the point @Lickit&Stickit was trying to make; at least, that’s what I got out of it.

Physical abuse isn’t okay. I mean, they didn’t really discuss this as kids, and what they know now is really just what they remember. Memories are distorted by current situation. Back then, it really was slapstick humor, both ways, and they shoulda discussed it like adults when it went too far.

Emotional abuse isn’t okay. We’ve been pretty clear about how they’ve hurt each other over the years, and how that keeps resurfacing. But honestly, Mike was emotionally scarring her way back into her childhood. They coulda discussed this like adults too, but they are still kids. What can you really expect?

At this point, can we just agree that they really aren’t good for each other?

This. It drives me up the walls when people go, “OMG, YOU GUYS ALL FORGET HOW MEAN LUCY WAS JUST CAUSE SHE’S CUTE, WHINE WHINE WHINE.”
No, we haven’y forgotten… but apparently you have forgotten Mike’s fair share way back when they were all babies.

Or that time Lucy nearly got herself killed or worse when he got drunk on that candy… or when she tried to save him even though she couldn’t swim…
or when she refused to use Paulo as a crutch even though he was basically begging for her to take his soul.
Oh you know, but Lucy is a big mean bad kitty who clearly doesn’t care about anyone but herself. ( that last sentence was sarcasm gaiz. )

When Lucy was little, the reason she had no friends was… guess what?….
No, not because she was mean…. but because
1) she was a tomboy, which made the girls dislike her. ( true story guys, female cliques really are that mean even as babies sometimes. )
2) she was a girl, and little boys sometimes dislike little girls with cooties.

She didn’t become “mean” until she became afraid of rejection. Even still, that began to brush away after she met Mike, and probably would have all-together if it weren’t for the turn of events..

Quite frankly, if a boy who was once my soul bestfriend and hero completely forgot me for another girl, I would in fact be a little hurt…. that alone would make me a little afraid of losing him again if he ever came back… thus making me not want to get so attached…
but Mike takes things an extra amazing step, and once Sandy is gone he not only finally remembers that Lucy still exists… he realizes that he can totally use her and pretend that she’s Sandy, cause they look slightly alike.
( and yes, as a small child, he may very well have not realized how wrong that was. )

Now during this period, Mike either
a) continued to see her as Sandy’
or
b) started truly seeing her as Lucy and began developing feelings for the real Lucy.

But after the long days he spent pretending she was Sandy, how is Lucy supposed to know, as he leans in for a kiss, whether he is seeing her or Sandy?
Yes, I’m sorry, but if I knew that a guy sometimes saw me as his old “girlfriend”, I would be a little concerned and afraid to let him kiss me, too.
Lucy had every right to be afraid and defensive and she had every right to be nervous about letting things between them grow when she couldn’t tell whether he was seeing her or Sandy every time he looked her way.

One last time, Mike was young and foolish and he probably didn’t realize, because there are genuinely some things that one doesn’t realize at that age.

So what does that mean in the end? It wasn’t really anyone’s fault, Lucy’s distance had good grounds and Mike’s mass damage-infliction upon her was almost guaranteed cluelessly done, and it was all just a giant disaster of coping methods that needed more communication on both sides. It was nobody’s fault, they both accidentally hurt each-other and reacted in poor ways as a result.