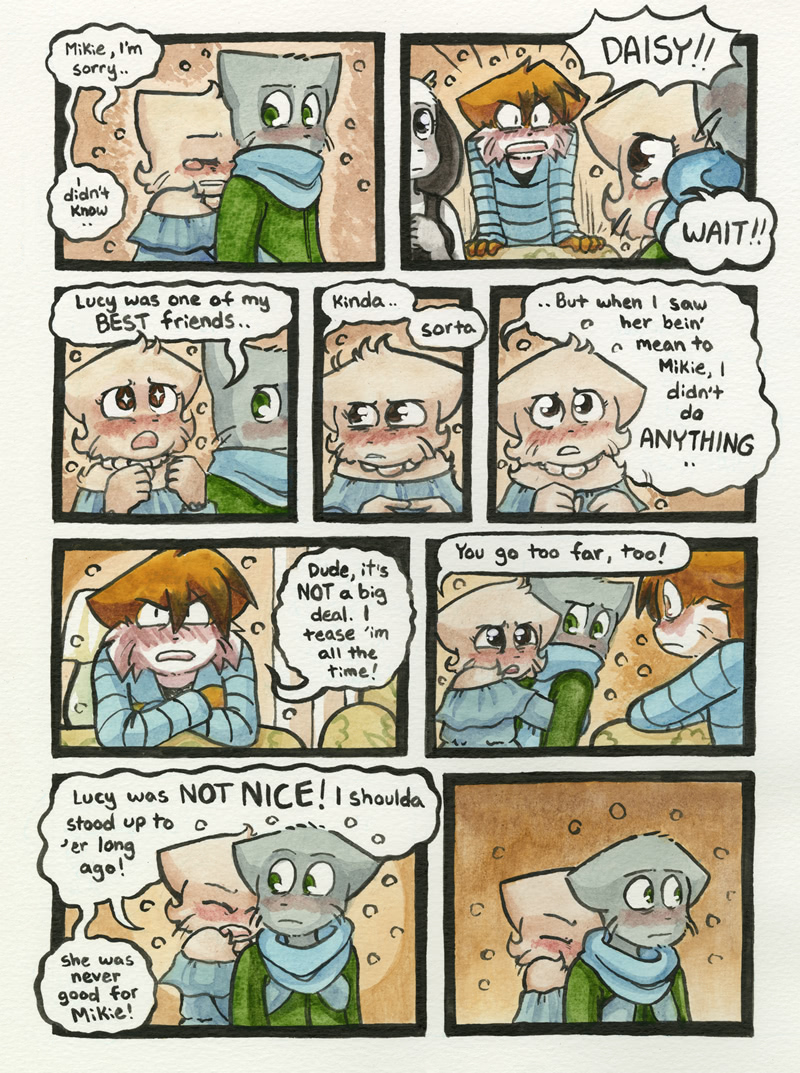 Did she forget way back when? Back in Confrontation when they got in a huge fight heading to the aquarium? She DID try and tell Mike that she was no good for him. But she went about it in a cruel manner and Mike rejected it. Back then Daisy didn’t know Lucy all that well and thought she didn’t give a damn about Mike. When they got in the fight Lucy fought for Mike, and for Daisy and tried to save someone who thought the worst of her. Daisy never really confronted Lucy about her behavior though. Back then Mike also told Daisy that she didn’t know Lucy at all and shot her down when she tried to tell Mike that Lucy was no good to him and treated him badly.

She again brought up how horrible Lucy was in the Arc where she was trying to manipulate Mike and make him go out with her instead. She yelled at him that Lucy was terrible and that his feelings for her were a lost cause and that she was a “bad prize”. Daisy has repeatedly tried to tell Mike how horrible she is because of her own jealousy geared towards Lucy because of Lucy’s appearance and because of her assumption that everyone loved her for her looks.

Daisy doesn’t even seem to realize that the things she envies Lucy for, are not things that Lucy even likes about herself. Lucy has major self image issues and actually HATES the attention that she gets for her looks. Daisy on the other hand sees Lucy as if she were basking in her beauty and takes advantage of using her looks to influence others. The truth is Lucy probably wishes she looked more like Daisy because she would rather NOT have all the attention that comes with her looks. She does not get any confidence from her looks, she feels she has to be very defensive whenever someone brings up her appearance because it makes her feel vulnerable. It actually helped fuel a major part of her violent outbursts. Lucy wasn’t very violent as far as we have seen UNTIL she hit the age where she began to develop and began getting attention for her looks. That was when the fists came out and she began lashing out physically at pretty much everyone.

I love Daisy, but she lets her jealousy get to her way too easily. Maybe I am a bit biased because I had a very similar experience to Lucy and began lashing out and purposely covering myself up because I hated getting that kind of attention. I just feel that Daisy allows her own jealousy to blind her from seeing the truth, because she can’t imagine that Lucy would have self image issues the same way she herself has self image issues.

I do like that she finally stood up and said something. Even if she isn’t completely right about not trying to help Mike, she did, but he stopped her and denied it. Paulo does tease Mike a lot and he does tend to take it to far so I am glad she said something about that too. It doesn’t excuse Mike’s behavior and I really hope this gives Mike a wake up call to the fact that they actually HAVE been there, but he has been, for the most part, shutting them out or shutting them down and alienating himself.

Yes, we were camping out. I still have some s’mores left somewhere, if you’re interested.

To be fair, the only reason he went along with it in the first place was because he actually liked her, loved her. But if you read through from the time of his admission of love to her up until she admitted it to him, he slowly grew more bitter. I think the major reason he was so angry at her when she admitted her love for him was because he was finally, finally getting past his feelings for her and focusing on his feelings for Sandy. He felt he was just beginning to heal, and then she goes and tears that emotional wound open again. And also, remember that it took at least several days, if not several weeks or months or even years, for Sandy to convince Mike that how Lucy treated him wasn’t right. The panels in the part I’m talking about show a definite time-lapse between each, though I’m not clear on the actual period. It’s not like she said it once and he just turned around and accepted it. He defended Lucy for quite a while before finally agreeing with Sandy.

But see, that’s just the point. He has never liked it, but because of who he was, he put up with it, for a damned long time. But it was never right, not from the beginning. I guess I’m just going back to my opinion that everyone’s at fault here, but honestly, he has a point. From his point of view, it WOULD look like everyone was siding with Lucy, because whenever a problem cropped up between them, the group took Lucy’s side or remained neutral, regardless of the circumstances. They deserve to have a bit of a slap to the face, if for no other reason than to wake them up to how they’ve been acting. Mike’s not the only victim in this, but he IS a victim. Maybe not always, and it doesn’t mean he didn’t screw up royally when he crushed Lucy, but there it is.

Just want to point out Taeshi has stated on twitter what Lucy did to Mike was not specifically abuse.
Kit Stolz ‏@Mirrorhanyou
@Taeshi I have just one question about BCB. Are we meant to view Lucy’s actions before the retcon as abuse?
Veronica Vera ‏@Taeshi
@Mirrorhanyou Mike’s gotten angry about overstepping in the past so it’s not really a retcon. Playing around is fine, but there’s a limit
Kit Stolz ‏@Mirrorhanyou
@Taeshi I can see that, i’m just curious if we are meant to view it as abuse specifically.
Veronica Vera ‏@Taeshi 22h
@Mirrorhanyou Haha, not specifically. It’s more a case of a person going too far and making excuses when told to knock it off.

Also want to add that it was not Daisy’s job to stand up to Lucy, it was Mike’s. To quote a college professor of mine, “People treat you the way you let them treat you.”
By putting up with Lucy’s behavior and sticking around, Mike sent the message that her behavior was okay and since Lucy has such obvious issues, it never occurred to her maybe how she was acting wasn’t right until it was pointed out to her.
Finally, i don’t hate Mike or Lucy and I don’t side with either one, but I do dislike Mike’s constant, “no one knows how I feel, I’m so put upon” attitude.
During the Christmas party he told Chirpy, she could never understand what it’s like to be left and was wrong. http://www.bittersweetcandybowl.com/c28/p10.html
He also told Abbey that he couldn’t know what it’s like to feel powerless around someone who depends on him and again he was wrong. http://www.bittersweetcandybowl.com/c39/p9.html
Now, he’s going on about how everyone’s a jerk and no one likes him, wrong once again. When is he going to stop making the same assumptions and mistakes over and over again? When is he going to stop acting like no one has it as bad as he does and no one understands him. I don’t hate Mike, but he is really starting to annoy me.