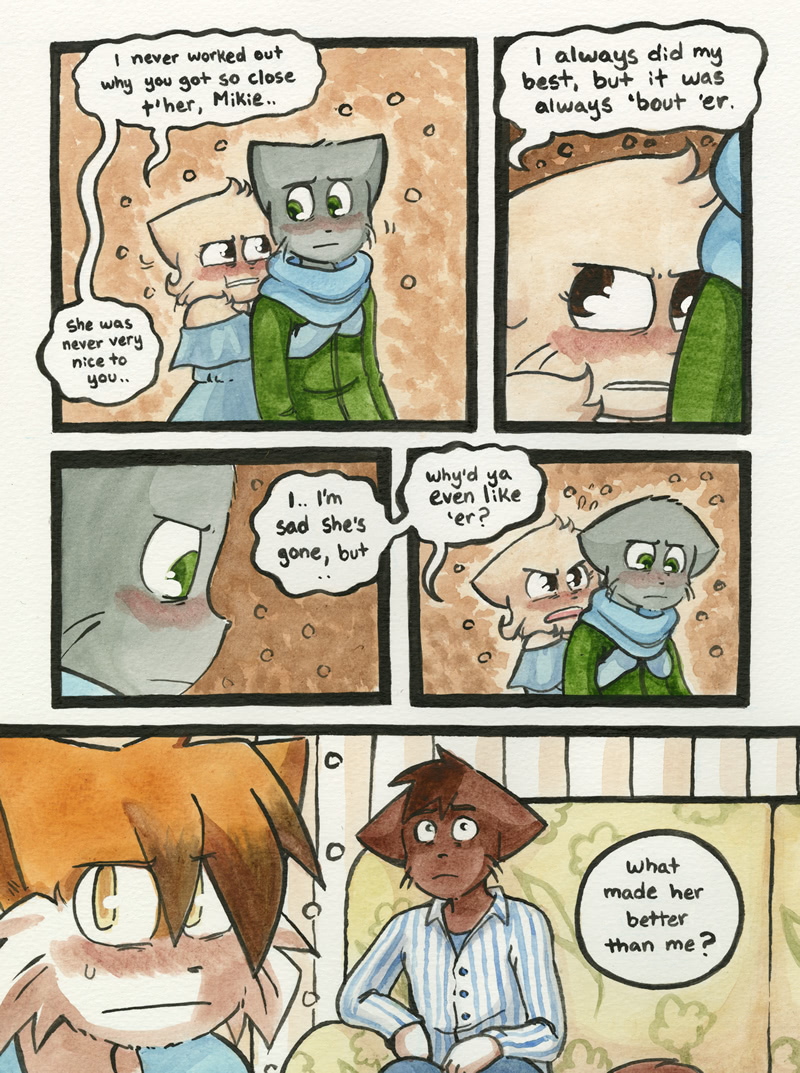 Veronica: how you doin abbey

Oliver: REMEMBER IF YOU LIKE ABBEY GETTING SAD ABOUT WOMEN DESERTING HIM YOU WILL REALLY LIKE VOLUME THREE. The Kickstarter ends tonight, in a bit less than nine hours! Don’t miss out on all those great deals and stuff.

Uh oh. Poor Abbey.
That’s one thing that annoys me like hell. They way Daisy handles her feelings for Mike. There’s nothing wrong with having a crush on someone, but the way she’s been dating Abbey knowing that she has this strong thing for Mike is just terrible. Just like in Pillow Talk, when she’s talking as she sleeps and dreams of Mike giving her a “backrub” - massage or not, that was one of the many signs that she still had very strong feelings about our dear green eyes.
Now you have a bunch of drunk kids locked up in the same party, each one full of issues that they want to share… Except for Abbey. Abbey is completely sober. He will remember that, and wish to discuss it with Daisy later.
This doesn’t sound good at all.

Yeah, my comment on the last page, still ringing true with Daisy. She is insanely jealous of Lucy. She said this exact same thing to Paulo during Confrontation, and Paulo said “She’s hot, sue me.” The thing is, that really isn’t what Mike saw in her.

He saw a girl who constantly hung around him and annoyed him at first. It morphed slowly into a girl who competed with him in everything. After they got back together again, he slowly realized that she had nothing really except for him and came to grow to accept that he was the only one who gave her a chance.

After Sandy came into the picture, he completely forgot his rival. Even though Sandy tried to get her to join in, Mike was too focused on Sandy. When Sandy was gone his image of Lucy morphed again. Lucy accepted him back as if nothing happened and went back to the way things were, but she was more guarded, more cold. Mike used her as a substitute for Sandy and took away Lucy’s identity and made her into his fantasy of the girl he lost. It wasn’t till Lucy confronted him about using her as a substitute for Sandy and burst into a fit of pain and tears as she yelled at him that she couldn’t be Sandy that he finally snapped out of it. His image of her changed once again as he began to realize how fragile she was and became a better friend and stopped trying to use her as a substitute and began to like her for who she was.

Not long after that, Lucy began to flower and turned into the violent Lucy that he grew to despise when he took Sandy’s advice too far and instead of saying something to her, just cut her off. His image of her was now one of someone who abused and used him and the sweet girl he once knew was being tarnished by the memories that seemed more prevalent when he focused solely on the bad. He cast aside all of the good sweet memories of the girl he fell for to focus on the one who was always sweet to him. He let his memory shift and change to create her into a monster in his mind to make it easier for him to hate her.

I think Daisy, with her comment, just opened the flood gates for all those sweet memories to come rushing back again, just like they did when he left the hospital. Lucy may have abused him and taken things too far, but she was also very kind, caring, and sweet when she finally let her walls down. There was even a time where Mike said he loved getting punched by Lucy. Back then it wasn’t really serious but as it progressed it changed, as he changed…

I also feel horrible for Abbey, Abbey has been so understanding of her continued affections for Mike and always seems to wait quietly in the background to give her her space and time when it comes to Mike. He knows he can’t replace Mike for her, but he tries his best to be there for her. Honestly Abbey is a lot better of a choice for her because he has really always been there for her since he arrived. When things go bad he is there to comfort her, support her, and encourage her to be the person she wants to be. He lets her control where she wants things to go, and allows her to set her own pace and her rules for how things are. He respects her and tries his best to help her with her self esteem issues. She should really stop taking that for granted, or she will lose him.

I am pretty sure this is eating Abbey up inside but he probably won’t confront her about it or ask her more about it until later when they are both sober and have some privacy… Poor Abbey.

To be fair, kids - usually when they’re boys - tend to be encouraged to roughhouse in ways that would be inappropriate as adults. To be double-fair, Lucy ended up taking ‘friendly roughhousing’ way too far, back when she started causing Mike to limp because she kicked him so hard, and ended up causing him to blame himself for her hitting him. That’s a very abusive vibe, and while I think Lucy was more clueless than malicious, it does show that she was self-centered to an unhealthy degree back then. That’s why I don’t blame Mike for wanting to break things off with her, but do blame him for how he went about it. None of this is black and white.