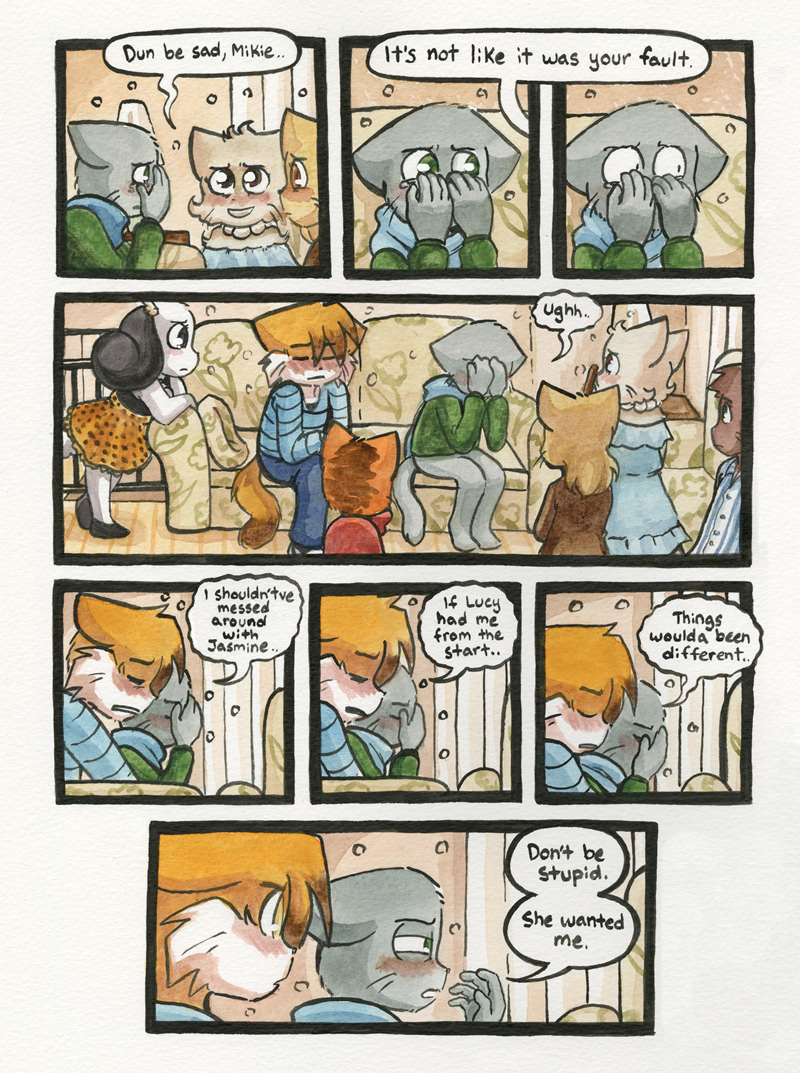 Any other people keep thinking how Lucy and Mike in 8th/Fall9th grade were just two kids too shy to talk about there feelings for another? Mike was too shy about reproaching the subject after his rejection in 6thGradeWinter… and Lucy was too shy for Mike hurt her in 3rd Grade/general social hardships?

Mike found it easier fantasizing about Sandy verses retry with Lucy after rejection. Lucy then call him out on it, and told him he should just called Sandy.
—AND HE DID—
Then that was beginning of all this new high school tension and drama.
And now we are here. Spring of Sophomore year. A lot has happened :3

Mike does seem conceited but he’s telling the truth, if you go back you’ll see that aside from being physically attracted to Paulo, Lucy mainly was concerned with Mike. And honestly Paulo blew that himself looooong before Jasmine showed up, he was constantly hitting on almost ALL the girls, kept trying to feel Lucy up, and whenever he seemed to be getting his act together majorly screwed up. Why would she be interested in him seriously when he was constantly sending mixed signals? Sure Paulo was there when he wasn’t pawing over all the other girls, but then you’d see him again and it’d be a complete 180. And this is coming from a former Paulo x Lucy shipper! He would be a decent guy if he had some self control for crying out loud, I just want to see him pick himself up and grow up a bit his tough guy act is getting old.

You did read the whole comic from volume 1 right? Or did you start from two? Mike doesn’t need to make lucy miserable to validate his relationship. He tried being friends with her but she KEPT being rude and violent (which depending on your background can be either funny or upsetting), and didn’t want to acknowledge his relationship with Sandy (I dunno why she kept hiding it from Yashi when Yashi knew waaaay back when he first called Sandy http://www.bittersweetcandybowl.com/c20/p2.html). What made Mike upset with the Paulo situation was how quickly she ran to Paulo when she couldn’t be with Mike, it made it seem like she didn’t honestly care at all about him http://www.bittersweetcandybowl.com/c45/p5.html . Which hurt because at one point he did have feelings for her, not just as a replacement he really wanted to just forget Sandy and move on with her http://www.bittersweetcandybowl.com/c20/p4.html.

That being said its still both of their faults, he should have set boundaries with her, and should never have used her as a replacement. And when he couldn’t deal with her anymore he should have tried to calmly end the friendship and just walk away. And she should have just been honest (I like you but I think we’re too young etc) and not kept physically abusing him (and pretty much everyone else). I think the main problem with the hitting is one minute its supposed to be funny (though if you look at the comments a lot of people did NOT think it was funny), next its supposed to be serious its really hard to follow how we’re supposed to feel about things sometimes.

Also Sandy does not seem as immature/stupid as some of the other cast, she could tell that something was going on/had gone on between Mike and Lucy thats why she asked if he loved her. Why else would he be defending such an abusive friend? Why didn’t he stop it sooner etc? If he didn’t like her and she was honestly hurting him (which she was) why keep being friends with someone like that?

Another point that I like to point out is that Lucy grew up as an outcast for being herself. The only love she received was from her parents and never from anyone from her age. When Mike started being friendly toward her, you should /expect/ that she would follow him as she wouldn’t want to let go of the feeling. What did they do as children? Tumble and wrestle as children do. Mike went along with it. Lucy was happy that she found someone that could accept her. As they grew however, Lucy held on that memory of playing like a security blanket while Mike grew out of it. She thought that that punch to the shoulder would have the same amount of friendship as when they were when they were little. Little did she know that that this would be one of the reasons that Mike would leave her. Like I said, this diminished as the comic became more serious. Some of you may cry “it doesn’t matter, it’s still abuse!” and I have an answer for that; this is the only way that she knew how to make sure that Mike was still a friend of hers. She never had friends before, she doesn’t know how to treat them and Mike never told her “this is wrong.” If you look closer, you notice that she only does this to two people officially, Mike and Paulo. The same people that are closer to her than to anyone else, the ones that /she/ considers her friend. She still hasn’t grew out of it is what I’m trying to say, but she started/ grew out of it by the time she attempted suicide.

I notice quite of few of you are blaming Sandy. Blaming her for what? Worrying about her boyfriend? She told Mike that Lucy shouldn’t be harming him and says “I don’t think I like her”, but when Lucy texted Sandy of her regrets and apologizes, Sandy immediately changes her mind. Not saying that she likes Lucy, but rather withdraws her opinion of Lucy being a bad person without even meeting her. Then she even suggests to Mike to make up with Lucy, another girl mind you, so that they wouldn’t have a bad relationship. This is after hearing Mike telling of the injuries he bore. Sandy is totally innocent in this, so please let her be. She only knows Lucy by name and handled the situation she was GIVEN and not PRESENT in maturely.