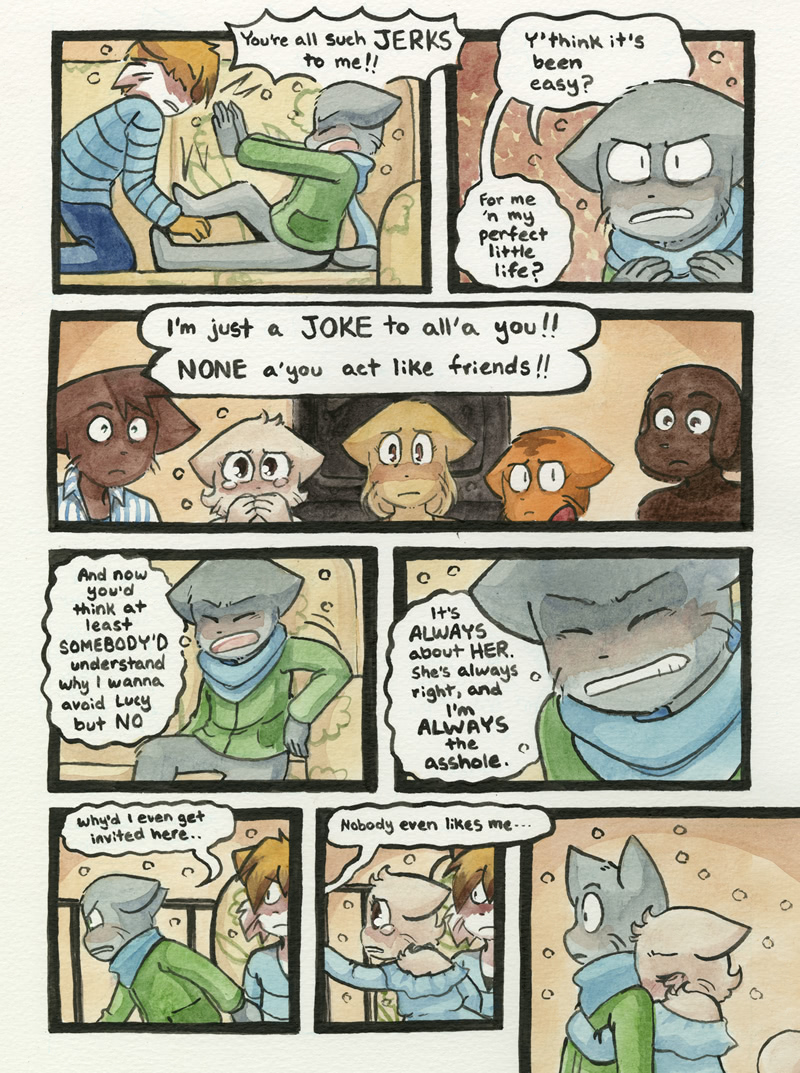 @Yisha Saying that none of us know what “real friends are” is a bit over zealous.

There’s a fine line between telling someone that they’re a parasite, and expecting people to instantly agree with you, than to try and explain to someone that they need serious help with who they are, and getting help from their friends to help said person out.

It’s obvious Lucy had her own issues. She was trying hard in December to be happy for Mike, though she went about it the wrong way. She abused him as a friend for far too long and lost her chance with him.

Mike treated her so harshly out of spite, and then tried to turn her “friends” against her, at least plant that seed of doubt in her mind. Instead of handling Lucy rationally, he just got fed up with her and took matters into his own hands instead of talking to others about the obvious problems he had with her.

Mike hasn’t been a good friend to anyone else as of late, the others haven’t had a clue until now just how horrible Mike feels about Lucy. But even through all of this, Daisy has always been the one to try and fix situations, to hold things together - though, if she’s doing this out of her love obsession with Mike at this point, or just trying to smooth things over, we won’t know until the next few pages.

Wow, love this page. Panel 5 especially, with taeshi emphasizing specific words. But this whole chapters been really powerful. From what they say, what they do, down to their expressions. But with this page I can see the falling action coming. Probably daisy will start off everyone understanding his feelings, and accepting what happened, questions being, will abbey take this hug to jealousy, and will daisy’s actions allow Paulo to understand mike too?

I can understand how mike feels entirely, and although its easy for some people to say, as I see here, how mike should have talked about things earlier, or he was still too harsh. Yeah, he could have, and he would have, if he was not so victimized and hurt. you can clearly see through what he says, how all those things in the past has left a horrible imprint on him that pains him. meanwhile, lucy could have not done that stuff at all, but cus of how she was judged as a kid, and more so, because of her ignorance of how bad her actions were, she didn’t.

In the end, none of the characters were bad, or real assholes, its just miscommunication, and torn up emotions, and ignorance, that caused these issues. Daisy seems to get the picture here

Thinking on it, I can’t recall a time other than that carnival date those two had where they were on bad terms with each other. Even when everyone found out he turned down Lucy, she more just stood there looking upset about it, but unlike everyone else, she didn’t rag on him about it. And even then, for both situations, the negativity didn’t last long at all. It took less than a day for the issue to dissolve, if I remember correctly. So if you think about it, these two have always stayed pretty good friends. Maybe even one of the few people Mike can truly call an actual friend.
Speaking of friends, it’s about time he laid into them on this. They haven’t exactly been all that great to him, and they had this coming. Even better, it’s practically what his blow up at Lucy SHOULD have been; at this point, he’s just told them what they’ve done, then tried to leave. And I don’t think he’ll have any backup extra-scathing remarks for them now, (well, maybe Paulo, but whatever) and especially not towards Daisy. And no, this isn’t him “whining”, all Mike-haters. This is an actual, fairly serious issue that should had been brought up long ago, but wasn’t, and is now being brought up. Deal with it.