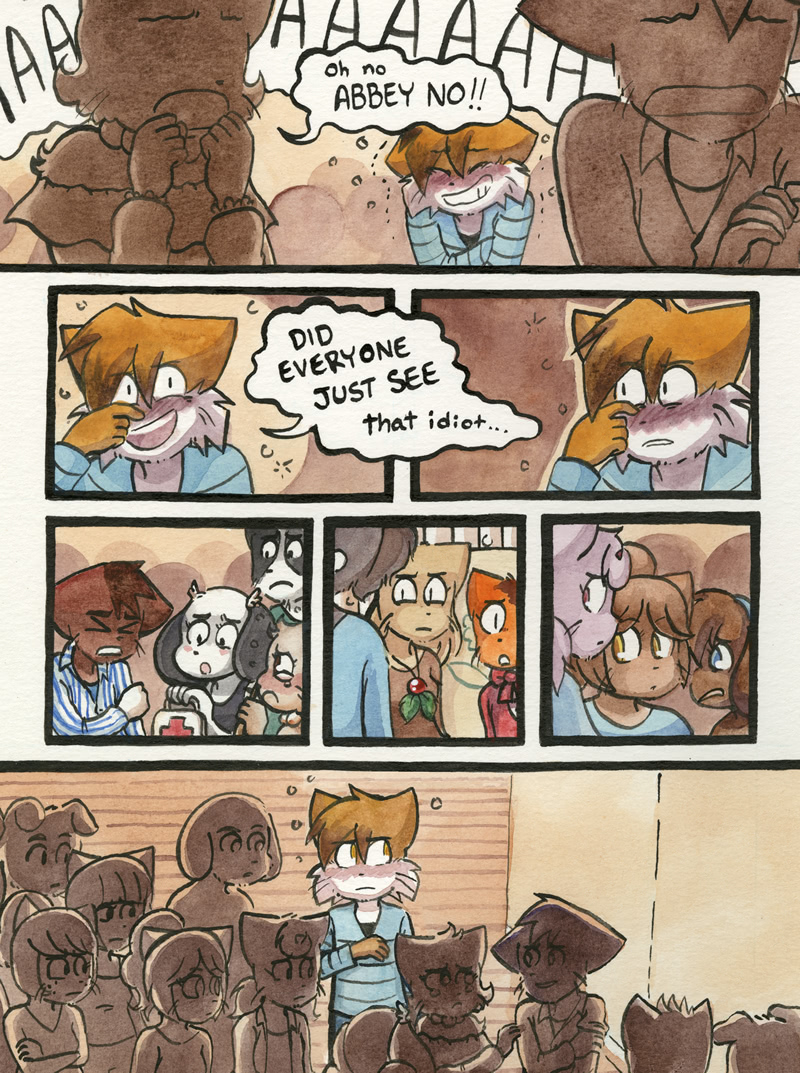 I like how this and the last page pretty much sums up the entire tonal shift of the comic. Also, Paulo continues to prove Jasmine right.

Well sure it was funny. But if Abbey really got hurt then that aint funny no more. In real life people wouldn’t laugh if your friend got hurt (unless your friend is laughing and is not hurting that much), they would find it also serious. Paulo laughed even though he should have noticed how everybody reacted. Tells me that he doesn’t really focus on what is around him

. Then again, Paulo and Abbey have never been that great friends.

I’m not trying to be mean to Paulo

. It’s just that many people have been commenting that they would have laughed also and that Paulo shouldn’t feel bad

. I find that pretty much untruthful. I doubt that people would laugh at their friend for getting hurt if your friend finds it not funny. I don’t think you should cheer Paulo on by saying its alright and that you would laugh also. Your just encouraging him to laugh more during serous moments. He should learn from this.

Meh. Nobody is going to talk to Paulo about his problems, so this will have to do. He realizes that he was not the best of people either (hopefully). I like Paulo (sometimes). But he does not take other people seriously enough. He has previously hurt people by assuming that opinions, emotions and non-physical actions do not matter. Hopefully, this will make him realize that injuries do not just disappear, and that other people’s minds matter a lot.

Often, the difference between a funny wound and an unfunny one is blood or visible injury. we might laugh at someone who walked into a pole or tripped on their face. But tears, bruises, and especially blood mark a serious wound. We don’t laugh at those with paper cuts or scraped ankles or friction burns or at crying children. There was a funny circumstance, but the wound itself was not funny - that’s what makes everyone sober up immediately. One might laugh about it later, especially if it was not serious. But, one would be laughing at the circumstances, not at the wound. When it happens, it’s super-serious.