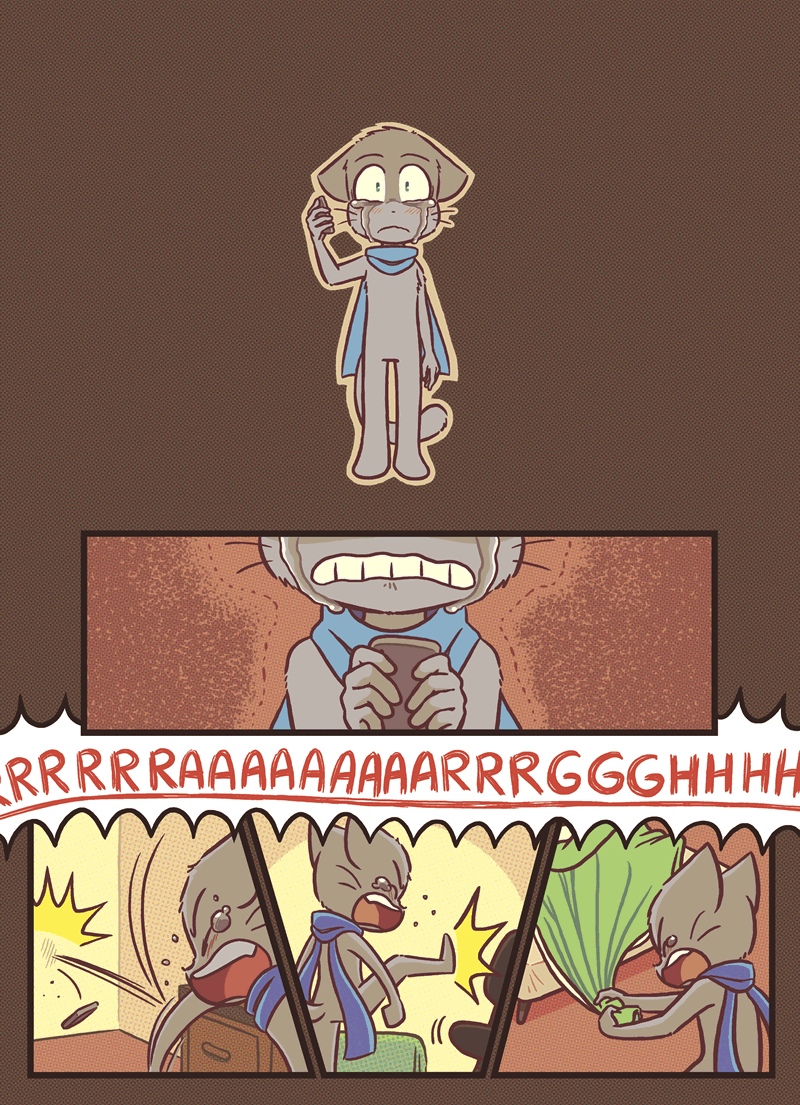 Mike's mom is going to flip OUT

The cackling sound I made after reading that. Omggggg

He's hulking out! I knew those green eyes meant something!

Wow, the contrast between this and Lucy’s quiet departure in December is striking.

I think it’s the different personalities. It was “i deserve this” vs “I don’t deserve this!”

Honestly? Relatable. When someone literally wastes your time after you've worked so hard to make them happy, it's really f*cking infuriating.

Ain’t no way everyone in that house is that asleep

Yeah, I'm going to stand by my previous assertion that Mike would have assaulted Sandy if they were talking in person.

OMG, please tell me that Sandy Blocked him, that will make my day.

Mike has turned into the Incredible Sulk

All this destruction is coming straight out of his allowance

Lucy: What a baby.

Idk how many of you are reading the webtoon alongside this but the striking difference you're watching is incredible. In the webtoon it's in the part where Mike just got confirmation from Sandy that he's her boyfriend and that she loves him and he's all smiles and on cloud 9. And then coming to this....

YES I noticed that too, no way Taeshi didn't do this on purpose

I have a really bad feeling Mike is going to keep taking his rage out on his friends. Especially Paulo, if he’ll talk to him.

kind of understandable, but you reap what you sow

You know part of me is surprised. I was sure he was just going to go the denial route and pretend everything was fine, that this was just their first fight. That sandy would never give up what he's worked so hard to maintain

Where are his parents?

His dad is at work and his mom is downstairs wearing headphones listening to classical music.

In one way... He wasn't regressing back into denial here, at least not yet, going through the anger stage, and letting out all that frustration may get noticed and a bit of a hit if anyone else is in that house... and well there should be more than just him I'd think. Hopefully Mom can be there, because you know the *ONE* shoulder that usually is there for one to cry on and more than able to give advice. SO even if there is all this anger being let out at once, someone there to calm him down, let him cry it out.

Really this realization & the release of his anger hopefully is cathartic and give him a chance to look at everything in a more clear light. And if Mom is there to talk and let him talk things out, all the better. Really that's what he needs right now, a more experienced, older, and unconditionally caring perspective to give advice and give him a calm outlet there.

Yeah, getting hung up on and refused answers would piss anyone off. The sadness will over shadow the anger very soon though I think. Maybe his mom will console him, since he has no friends to turn to 🤭 ... Im enjoying Mike getting his just desserts but he deserves a redemption arc too.

Tbh, I don’t think Sandy could continue to talk to him. He kept denying everything, and begging to change the outcome. I hope he can get real closure after he’s accepted the reality.

Redemption doesn't necessarily need to mean reconnecting with either Sandy OR Lucy. In all honesty, he's burned both those bridges. But that doesn't mean he can't at the very least start mending his friendships, and potentially find someone else present in his life to actually fulfil his romantic needs.

@Alec I just want to see Mike grow and become a better person. He doesn't need romance right now at all imo. He should focus on mending his friendships (like you said) and sincerely looking inward and facing / fixing all of his toxic behaviors/mindset.

I'm not at all surprised that he's throwing a tantrum, not only because it really must suck to be played like that but because he's very immature in general.

This comic is phenomenal.

Mike really went down the age ladder in 2 seconds flat

I feel really bad because IMHO, despite the fact that the asshole behavior he had shown towards his friends because of them worrying about him and him aggressively defending their valid concerns, Mike WAS a sweet good-natured boy. There was a reason a lot of girls liked him. And now you see him as the product of interactions with not one, but two, girls in his life, he went from a physical and emotional punching bag to neglected boyfriend turned asshole lashing out at everyone, and I can't just help but feel bad for him and wished he may have met someone else who truly help him flourish instead of the ones that were in his life so far. Sometimes we ARE the product of the relations we keep.

I mean he allowed it to happen? If he actually stuck up for himself and advocated for what he actually wanted or what kind of dynamic he wanted none of this would’ve played out like it did. The first time he became not ok with Lucy hitting him, he should’ve said something. The first time Sandy started not responding, he should’ve said something. Kid needs to go to therapy and work on how to advocate for himself.

When you receive and get used to abuse, that becomes your new normal; what you perceive as ok could wildly differ from what really is ok. I wouldn't really tell him "You allowed it to happen". He's got problems, deep-seated issues that distort his perception of reality. That's why I say I feel bad for him, he needs help; I wouldn't say "it's your fault" to someone like that the same way I wouldn't say that to a physically ill person, even if it were true. He went from being dependant on his relationship with one girl to another, and, maybe he doesn't know how to live without one? This is speculation on my part, but it seems he needed this relationship to work, he behaved badly, in a way he never had before, saying what he said to Lucy, advocating (wrongly IMHO) for her absent girlfriend, hitting his friend, etc.

I just hope this helps him wake up and realize he needs help because mental issues cannot be treated until the person admits he needs it.

And there it is. If thats not a break in the psyche i dont know what is. His mental health has been deteriorating over the last year and now he's offically hit his rock bottom. It'll be a while before he can get back to his old self, if he ever does. Events like this can change a person forever.

I really wonder what's next going forward from here for Mike, because earlier it seemed he burnt his last bridge with Paulo and now this. I'm actually a little afraid he may take this out on the one remaining friend he has left, Daisy.

Pretty sure Daisy ditched him during Witch Hunt...Could be wrong though, but he was left alone even then.

Okay, someone HAS to intervene. I know they can hear him if they're home.

A temper tantrum and violently destroying your room?

You're fuckin 16 and you definitely know better than to destroy the things your parents pay for.

I definitely see discipline in his future.

His mother was upset about him going over his minutes.

How is she gonna feel about him destroying his phone?

... Ok time for Mike's mom to step in. Please. She has always been a pretty solid and sensible character and we could REALLY use that

:Plays Linkin park Music and then starts tearing up the joint:

That's how I felt for most of your relationship Mike. Feel the rage flow through you.

I bet.... he's gonna blame Paulo. "If you hadn't told me to talk to her and tell her how I felt we'd still be together!" and seriously, someone in that house must have heard him yelling and slamming his desk by now. And after this outburst, DEFINITELY heard him and better check in to see what's going on. It's not THAT late, Paulo was just making dinner.

Guess it's his turn to jump off a building. In all seriousness, I feel like he is really mad at himself and the fact that the valid concerns of his friends were right. He was defending a falling tower, and made an ass of himself. He lost his greatest champion, Paulo. Lashed out at, and hurt Lucy. For nothing. And I believe it was Sandy's 'opinions' of his friends that made him hate Lucy. He stopped having his own opinions and let Sandy tell him how to think and feel. Let me stop rambling, I have so much to say.

Amen. He actually seemed to enjoy the "rough housing" note every time he mentioned it he'd be blushing. Similar to how Paulo is into that archetype, the tsundere. He only had an issue when Sandy said she didn't like it. THAT was when he suddenly started hating it

Sandy wasnt even saying super bad things about his friends, pretty normal stuff considering its mistreatment of your boyfriend at the time. Mike just took it, and cranked that shit up to 20/10

It was just playing around. And Mike instigated some of that to make Lucy hit him! And he enjoyed their interactions. He enjoyed his life more with Lucy than he ever did with Sandy. And what Sandy did was more mistreatment than anything Lucy ever did. I didn't see Sandy defending Mike from thugs. I only saw Sandy yell at Mike to grow up or lose her mind over a video game. I understand that Sandy may have some home issues, too, but how she treated Mike was unacceptable. I think emotional trauma is worse than being hit around. Mike knew how Lucy was and he accepted that. What sucks is that people like Mike have a good 80% relationship but when someone gives them the 20% that's missing they act like a fool not realizing they had more with the 80%.

Yeah, him and Lucy deserve each other, but he'll be waiting for her on the other side. ^o^

Get this guy a THERAPIST

Mike: YOU'RE TEARING ME APART, SANDY!!!!

Forgetting the lead up :P "Why, Sandy. Why, Sandy? Please talk to me, please! You're part of my life, your everything. I could not go on without you, Sandy." But yeah then there's of course the whole room destruction and all too. :P

It's almost like putting all your "money" on the Sandy "horse" was a bad idea. It sure sucks not having any other interests for 8 years.

The dire consequences of being in a long distant relationship.

So this convo went from she tries to brush off ignoring him by saying she's busy, she admits she's been avoiding him, she MIGHT like someone else, she actually LOVES said person, then says it would be unfair to them NOT to consider their feelings, and she probably should've told him when it started, then dumped him without enough time for him to respond.

Sandy's a stone-cold gal. But Mike HAS been tearing into her too. Not saying she doesn't deserve it, but damn