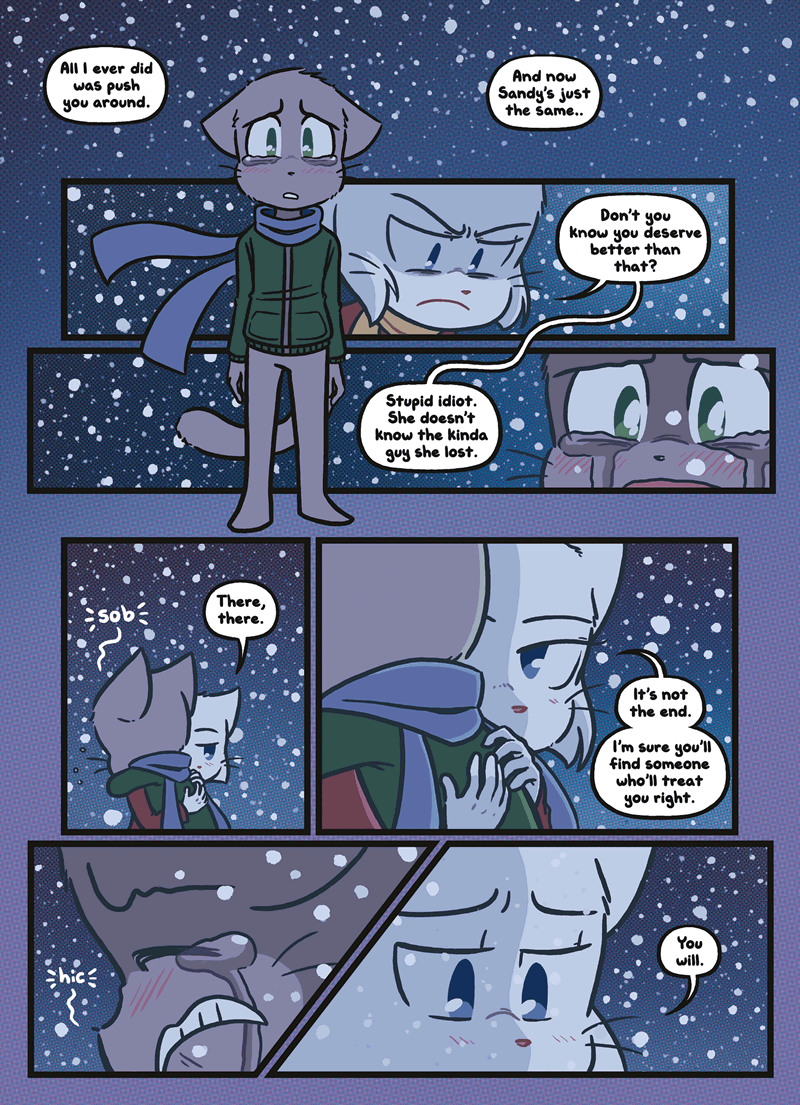 Gosh, this page is really hitting close to home for me. Beautiful work as always Taeshi!

Lucy has a point though. Despite Mike getting super defensive during his relationship with Sandy and pushing others away, he still has a long list of good qualities to him. He's FAR from perfect, but he's a well meaning kid at the core.

She’s way nicer than I would’ve been

Right in Mike's feels, she just told him how much of a pushover he is and that Sandy was no better in treating Mike than Lucy was. Lucy knows how much a nice guy Mike is but she lets him know that he's been acting dumb about letting these things happen when they shouldn't. Goes to show how much Mike is stuck in the past or in a child's fantasy and how much Lucy has matured after her own hardship and rejection from him.

My heart! Oh this page gives me hope

Welp. She caved. I guess I can't blame her. It's hard to resist comforting the people you love when they're broken down like that. Especially with guilt involved.

Lucy is being so kind to Mike, after everything. I’m impressed with her patience...

I hope that this doesn’t just end up with Mike avoiding his real feelings again, though. Honestly I would be nice if for once, Mike had something nice to say about her.

He’s been thinking about how supportive of a friend she’s been all day, it would mean a lot if he could just say something like “you didn’t always treat me well, but you were so much more than that. You didn’t deserve what I said.” In response to her extension of empathy.

I appreciate she understood the situation and addressed the thing that he needed? There's so much to talk about but he needs to calm down and get home. Hopefully, it goes that way.

While on the one hand I do love Lucy's empathy and compassion here, I still can't help but feel it's unfair for Mike to get comfort and support from her now. It's good that Lucy apologized for her own mistakes and it's good that she's compassionate, it just doesn't sit well with me. Too often we are expected to "be the bigger person" and ignore the ways people have hurt and abused us in the past, when in reality it's perfectly reasonable and valid to set up boundaries with them and have them respected... and Mike has repeatedly stomped on her boundaries in this scene and been rewarded with the consolation he clearly craved and needed. It's a very complex situation that leaves me with mixed feelings. Excellent and realistic writing imo.

A return to the status quo...

Lucy is much more mature, I would have been much meaner than that. Lucy is acknowledging her mistakes, I hope Mike does too.

I thought it would get weird, but I like this. It is hard to dismiss history like that. Knowing each other and wishing the best, especially when you know you’re not the best with each other.

I have a friend who maintains friendships with everyone as much as she can. It’s got good sides and downsides. But it reveals the quality of relationships when you have many different experiences. I think these two can reach a point where maybe they can have a respectful companionship together. They’re still so young so of course it won’t look ideal to us. They’re trying to figure things out, you know?

It would be nice if they can be friends even if it’s not the level that they had before. I mean, it was messed up before, so now there’s a chance for it to grow into something more healthy.

I can understand Lucy's reaction here. She's never had a chance to truly apologize to Mike for her own bad behavior after the blow up in December. It probably feels like a weight off to finally get to speak to something that seems like it's been a lot of painful guilt to carry around.

that being said, I'm going to be salty if she's the only one stepping up to take some accountability for their behavior here

I think here Lucy gave up ever getting what she needs or wants from Mike but is willing to give him what he wants with not expecting anything in return...that is what I am taking from this page.

Edit: I know Mike apologized a couple pages ago just dunno if it was sincere or not.

Lucy ALSO deserves better. And this? This isn't it

Not what I expected but I’m not all the way upset. Hopefully this leads to Mike also being accountable for his own garbage behavior. I don’t think 1 chapter is enough for him to get that so I can wait to see how this goes

Damn Lucy, lookit you, having your shit together and helping out a hot buttered mess. Go Lucy. Ten points.

I see where she is coming from, and I hope this comment gives her healing and closure. However, I hope we don't see a backslide where she takes all the blame for their toxic dynamic.

Lucy deserves so much more then to be the second choice, the girlfriend in reserve he runs to for comfort when things with the model don't work out. She has, several times, called him out for running to her when Sandy is unavailable. I hope this is part of her refusal to participate in that old relationship that he is asking of her.

He didn't deserve the way she treated him back then, but to this very chapter it shows that he also doesn't respect her boundaries or her choices. That is abusive behavior too. For example, when he turned her down after her love confession and she went to another friend for comfort, he shamed her for it. He even brought it up again in December and sexualized her friendship with Paulo even though Paulo had shown that he cared for Lucy as a friend and a crush. Even though going to another friend for comfort is a perfectly healthy choice. And Paulo did help, and showed he was a safe person because when she reached for him in a moment of weakness he stopped her for her own good.

Now that she isn't unhealthily clinging to Mike, her ability to make better and closer friendships with many other kids has grown in leaps and bounds. I think this shift in the dynamic still scares Mike, as his repeated comments of "Go laugh at me with Lucy" show he is threatened by her new, stronger connections with the group independent of him.

I don't know. I really don't like Lucy's self defamation. Yes she pushed him around but there was zero malice. What Mike did to Lucy, putting her down the way she did was outright evil. The fact that she thinks 'he' deserves better, even though he has treated everyone like absolute garbage, shows she still has a lot of self esteem issues that she is trying to work through.

I don't know. I really don't like Lucy's self defamation. Yes she pushed him around but there was zero malice. What Mike did to Lucy, putting her down the way she did was outright evil. The fact that she thinks 'he' deserves better, even though he has treated everyone like absolute garbage, shows she she still has a lot of self esteem issues that she is trying to work through.

Geez so many people in these comments really have no sense of forgiveness and mercy.. like dudes she’s comforting an old friend in a time where he needs that. While yes their relationship has been extremely abusive from both sides in the past she’s not in the wrong for comforting him.

I just want them to kiss up and Get along <3

I dont think anyone's saying she's in the wrong, they're just pointing out that once again Mike is trying to use her as an emotional back up to sandy.. I just dont think nows the time for this conversation to happen between them. He should get himself together, get some help elsewhere and THEN apologize to Lucy and maybe build a friendship again.

The only good reply Mike can have is:

"I was the one who was abusive, I pushed you away because..... I do like you"

"I choose Sandy, and I regret it"

This is sweet and all... but she's back to the role as his emotional support which makes me sad. This isn't fair to her. But she's trying to be the bigger person. Lucy's such a trooper

this page makes my heart hurt. Lucy deserves better too.

Wanna bet she gives him her scarf?