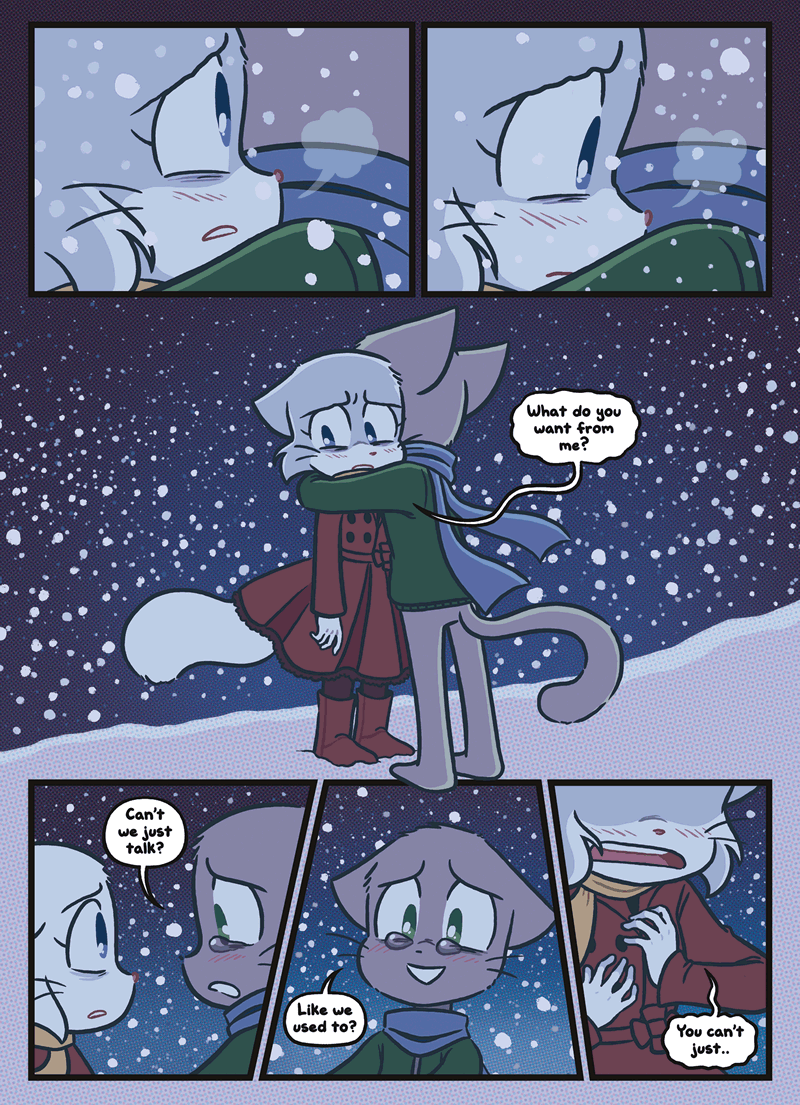 Veronica: you know who else mike could talk to like he used to do with lucy

Oof 😅 I understand he wants things to be okay right now, but things aren’t okay for Lucy either, and he doesn’t seem to be thinking about that. No they can’t just talk like nothings wrong. I think he’s having a mental breakdown.

Sorta sounds like he’s responding more or less to a question like “what do you want to see happen eventually?” But yeah he is definitely having a mental breakdown, so he’s not gonna make a lot of sense in this moment.

Lucy ain't bending for nobody. She ain't gonna talk to you Mike 'cuz of how you threw her under the bus.

Mike trying to jump from one unhealthy obsession to another

I'm so frustrated with Mike I can't even. He just makes me feel AUGHHHHHHH.

Correct me if I'm wrong but didn't Lucy try to make things right before she left and he wouldn't have it? (It's been a minute since I've reread everything)

After the play Mike pulled her into a room where he told her what he did wasn’t ok, and that they “still have a lot to talk about, it’s not like everything’s okay” but that if she was “interested” they could “start over”. She responded “that’d be nice”, then went and found out her family was thinking about transferring her to a different school. Fraught with distress, she ran away thinking stuff like “why did everything have to seem okay right before I have to leave” and eventually things like “I don’t belong anywhere”, “everyone will be better off without me”, and then jumping off the building attempting suicide.

Yeah she did; she eventually and gradually stopped being abusive and gave him some space starting from the chapter where she tells him how she feels up to December, but Mike still thought she was a pain in his butt.

Before the play and during prep for the play, yes. She tried to change and be better and just wanted to continue being friends. He pulled the thing in the December chapter during that time and she was pretty absent from interacting with him after that.

After the play, it was as Strikehedonia says.

Yes that’s right @Kash Bran! Sorry I misread, I thought you meant RIGHT before she left. She was trying to make things right in prep for the play, but at one point right at the beginning of the play prep, she slapped Mike in the face after reaching out her hand saying “break a leg” and him reaching back out smiling and saying “aww..” so I guess maybe that was the last straw idk.

it's been a while since I've read that part of the comic too, but I wouldn't be surprised if Mike's attempt at burying the hatchet at the end of the play was because Veronica was originally intending to end the comic at that point (I think? I might be remembering wrong). It always had the feel of something that would probably get retconned to me if the chapter ever got redone since that was a one-off blip and otherwise Mike carried on like they were bitter enemies after that point.

AlisterTX I thought I remember something like the plan was to actually have Lucy dead and that got changed?

Oh I do so hope Lucy tells him what for. "You can't just-" is dang right.

Jesus christ I hate Mike even more now. Due to past events I absolutely despise fuckers that treat people like a mere convienience. And that is exactly how Mike is treating Lucy right now

Wow... I feel more sympathy for Lucy than for Mike in this moment

Come on Lucy, say what you want to say ;_; don't let him get in your head

You can't just... expect things to go back to what they were, Mike.

Now Lucy is about to break down oof :(

This is the second time she asked "what do you want from me? Now...he can say. Wth dude. Why? Mike dude the world does not revolve around you. I understand the relief of maybe finally getting comfort like the way you want.

I am dying to see Lucy call him out directly on how unfair it is for him to just try and sidestep all his cruelty toward her now that he needs some of the consolation she used to try to give him.

I hope Lucy calls him out too. She seriously doesn’t deserve to be in this situation, and Mike is being really naive. Talk like we used to? Mike...you guys hadn’t really “talked” for a quite a while before she left, and that was 100% your choice. :[

I know you finally are starting to realize how much you messed up and how much you miss her, but he’s going to have to work a lot harder than this.

I've said all I can say about Lucy not being the person to help Mike, so let's talk about Taeshi's showing that Lucy is pausing and thinking. This isn't the first time, so it's not coincidence, it's deliberate how we get these panels where Lucy seems to take a breath to stop and consider. A+ work! We can see how therapy has been affecting Lucy in that she's not as impulsive. She recognizes this is a hard situation and is trying to think before speaking/acting.

So true, this 100%. Go Taeshi. Also my autocorrect tried to make “taeshi” into the word “starship” for some reason, and I thought that was awesome xD Taeshi the starship 🌟 🛸

God damn do I feel Lucy with this. The constant flip flop between I don't need this and this person needs me.

oooh, I can't wait for the next page. Mike is super naive and oblivious to a terrible fault so I'd love to see what Lucy has to say and see where things go from there

Mike seems to be missing certain parts of the puzzle between them so I don't think he has any actual ill-will towards Lucy, he is being very very clumsy and self-centered with these social situation especially since his heart just took a blow from his cheating ex-girlfriend. Every chance Mike and Lucy had to actually sit down to talk things out either never happened (after the Play and before she attempted Suicide he did want to talk) , he was put on the spot/caught off guard and didn't know how to navigate the maze that are his emotions in time before Lucy got fed up and walked away, or the time and place just weren't appropriate for it, period.

But at this point of the story Lucy is still healing and it's really up to her if and when they can have that talk. She is not dependant to the point where she will hang onto whatever he says to heart anymore, and good for her! But I do hope that at least in the few next pages or so that Lucy could give him a piece of her perspective on things and give him something to chew on before she cuts this conversation short and leaves him at the tree.

If these two teenagers never end up being friends again then at the very least i hope that ever so oblivious and self-centered Mike will have a blatant grocery list of things that he did wrong and will learn from his mistakes. The first step to recovery is admitting you have a problem, but how can you even recover from the problem if you can't even identify what the problem is in the first place because you're so damn dense? Anyway, I am rooting for these two no matter the outcome! lol

edit: also if anything I said was incorrect in canon, let me know since I know my memory can be fuzzy at times lol

It says a lot about Lucy's growth at the point of her life that Mike isn't eating snow right now. We know she has the ability to throw him, especially after all this on sided physical contact from him.

Ah Mike; I'm afraid these things are going to take time and you probably won't ever be able to go back to that same level of trust and intimacy you two had before. Mike has this pretty consistent problem where he'll just bottle up all his feelings and emotions until they just EXPLODE out in the worst way possible. He did it with Lucy last December, with Daisy during Halloween, with Paulo taking his phone, with Sandy during that last call, and even this right here. This is an important conversation to have absolutely, but with how emotional he is it doesn't leave a lot of space for Lucy's feelings in the matter. And the phone call with Sandy NEEDED to happen, but it should have happened much much sooner before his emotions got so big and unmanageable. I do hope Lucy leaves him with some food for thought, some real inkling of how he'd hurt her and their friends (which I'm sure he's somewhat aware of on some level, just living deep in denial)

literally how many times has he grabbed her (after being told not to touch her!) by now

like the rest of his behavior is definitely shitty but you can sort of understand where he's coming from and that he's especially fucked up right now. I think the insisting on making physical contact against her wishes and not letting her leave is the most upsetting part for me

absolutely, same. She made it obvious through her actions and words to Mike that she didnt want to be touched multiple times to him. There's no way you can misinterpret that, Mike. C'mon..

I think this is actually a good step for ‘em. Dumb kids.

I like this but... Mike no. You still need to think about her...like Lucy really want to be done with this but with him flipping and etc. How can she. He be friends 1 day then flip to be mortal enemies the next. If Lucy accepts it now, she.is going to jump back to her ways before. Really they both going to be conflicted at this point. Mike in denial like he's good from before, Lucy going have to LIE to please him. She like still had a heart for him. Now she's trying to be the bigger person. He just gonna say everyone laughing at him then it be all over again. Hope Lucy break it down to him easily and just keep it on an open book. Because from this, Mike doing his way like a child. Push his agenda over hers. His needs vs hers. Again someone need to step in.

Lucy: You can’t just talk to me without taking a breath mint first, you know your breath always smells like fish before we talk.

Mike: Oh yeah, I forgot. Sorry about that.

He’s doing way too much demanding things of her and not enough offering things to her. He hasn’t said anything to indicate that she might actually benefit from having him back in her life. Empathy goes pretty far, but Lucy is both intelligent and more prone to self preservation now! And “like how it was before” is the best you can do?? Don’t you remember that how it was before made you so miserable that it turned you into an asshole??

Been reading this webcomic since 2012. Its been such a treat to keep up with it every week. Subscribed on patreon Cause this chapters just too good to not see ahead.

Thank you so much :D