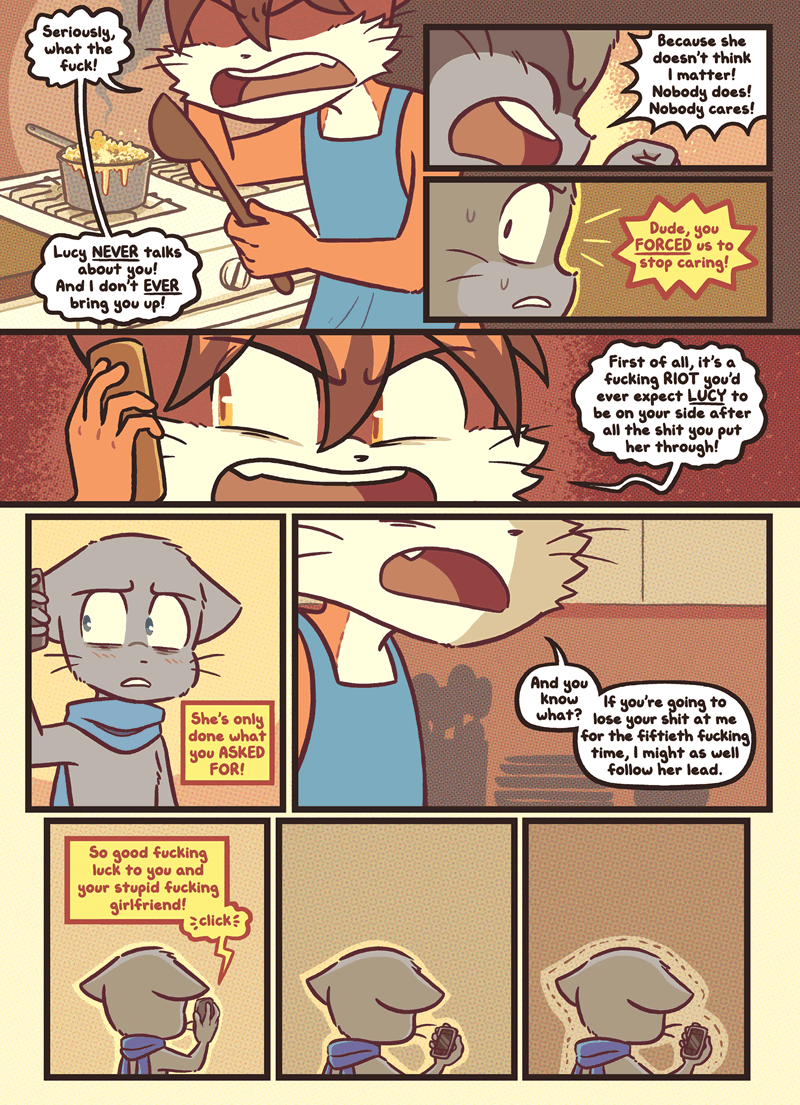 (I never knew people used a microwave for instant ramen, I always liked using the stove like Paulo does. It’s nice and cosy)

also uhhhh paulo better call daisy to copy her homework instead, though he’ll have to deal with a little bit of scolding. Dammit, Mike, this coulda been easy!

love it when authors understand buildup and sweet release

Good for Paulo, you tell him

Only Abbey is left. And he hasn't seen any of this yet.

Yeah of course, well done Paulo you don't have to put up with this!

I'm so glad Paulo told him what's up. I was tired of watching him being treated so badly!

Oooooooo its getting spicy👀

I think Abbeys the only close friend left that hasn't told him to his face that he's being horrible to everyone. I hope that this will make him actually think about his relationship with Sandy instead of just making him continue to belive the world is against him.

It's validating after so long of watching everyone endure this, but of course sad as well. (bittersweet! ha, ha...) Mike is alienating all his friends one by one, in favor of a girl who just does not have the time for him and has built a life for herself now without him, who relies on him for nothing that we've seen except occasional nostalgia.

And Mike has no one but himself to blame, treating his friends like they were nuisances and assholes when most often they were trying to look after him and rightly worried about him.

Prouda you paulo.. You’re too good for him

Can we get an Oof in the chat for Mike messing up real bad?

There aren't enough oofs in the world to cover all those times at this point.

I really thought Halloween was gonna be Mike's rock bottom but I underestimated this boy's shovel game.

Hell yeah, blow up his spot

Glad some one said it to Mike. Maybe he will get it together

Some one finally told him what's up. Hopefully he finally gets it.

I wonder if that was what Mike needed to hear too realize how much of a POS he is, and maybe he will try too fix the problem, but it would be too little too late but he may still try

jesus christ finally! someone said it! mike literally needed to hear this, i get what he going through but the fact is that it was his own doing, he literally yelled at each person who mention if he is alright or not. yeah maybe daisy and paul may not done it well in the past but the fact is, sue was the only one who tried to approach it peacefully and guess what! mike push her way in such a angry rant that it literally show that he is such in denial. sue alone just realize it not worth to get to be emotionally drain by mike. paul did his best to approach it best as he can after learning that mistake and what mike said; it wasn't his fucking business to but in.

mike alone have cause this, mike alone did this to himself to cause everyone to ever stop approaching. paul have made the decision alone which was for the best, that it best to leave mike be. cause mike have been in denial on why his friend ever stop approaching or even dare to care about mike until someone! FINALLY SOMEONE! said it! no one but him is at fault for the cause of his misery.

Hallelujah! Paulo telling it how it his is just so good! Please let this be Mikes turning point. PLEASE.

Paulo layeth the smackdown on that jabroni, Mike!

This recent page was so much It made me go back and read basically half the comic... god I can't wait to see how this Chapter goes...