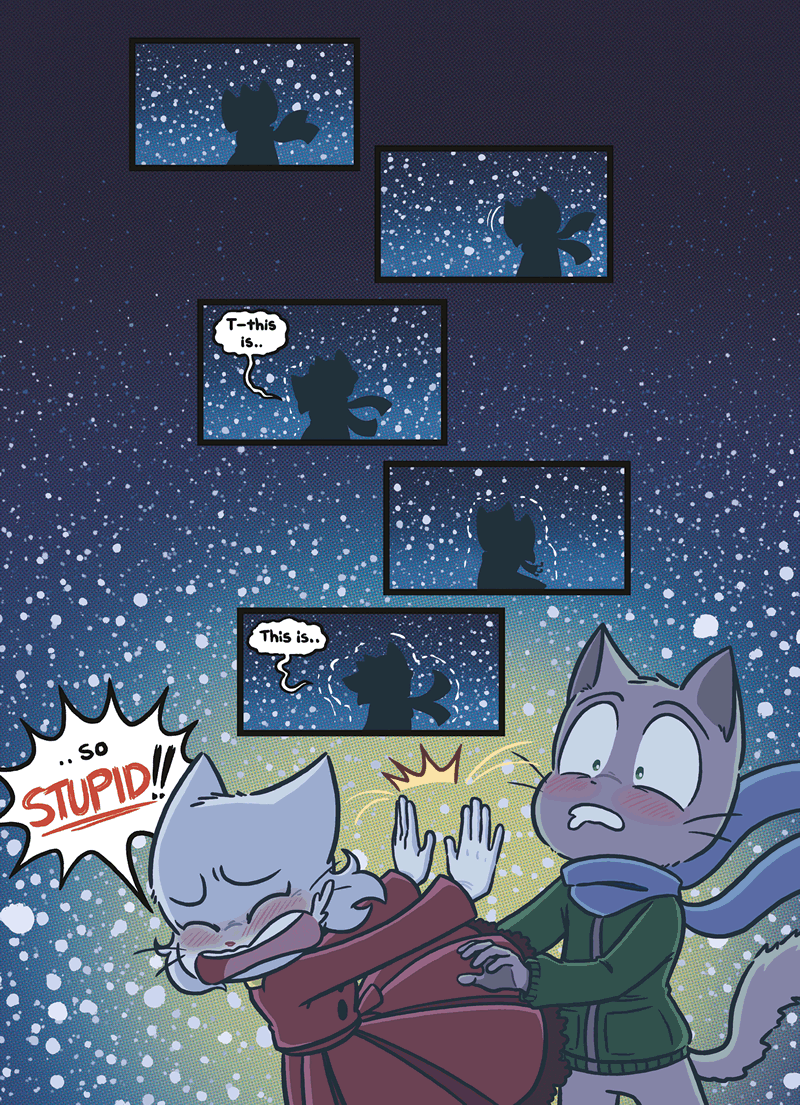 Veronica: See, Lucy gets it!

Oh shit i knew something bad was going to happen

lol she's not wrong though

WHAT EXACTLY IS HAPPENING IN THESE SHADOWS BRUUUHHHHHH

Good catch! I didn't even think of that possibility the first time i looked at it

Well, now can we actually like, have some sort of convo? Because that was clearly a "Sandy is gone and therefore you're back in" sitch, Mike may say otherwise but dude didn't have anything to say until she left

Perfect, this is what I was expected. You tell him, Lucy!

I absolutely love this, this is hilarious. Exactly what we’re thinking too Lucy!

Mike’s face in the last panel is absolute gold.

I'm sorry to hear that, I hope you've been able to recover from that or at least to some degree.

mike is the worst kisser confirmed

Yeah, she needed to stop it and tell Mike that its not okay. I said before its not only a week and Mike is smoochin' Lucy. Bruh, hol' up there boi.

Lolol the literal reference on them swapping spit tho

Okay...okay...now give it a night to sleep on it then talk it out.

Let’s not forget that she criticized Mike for being angry at her for caring more about another boy. This still reeks of manipulation. His feelings might be raw, but he has always fallen back on “she just can’t get over me, everything she does is related to me” and it looks like he just wanted to reassert that control he has over her and her feelings. I hope Lucy hits back and let’s him know he can’t control her emotions anymore.

Or... and hear me out... he's just being hypocritical, and it might be something he's not fully aware of considering his current state of mind? It's still scummy, and should absolutely be called out, but it's still quite early to consider this malicious intent. He didn't exactly run to Lucy's house, after all; this entire scene has been extremely spur of the moment. Hopefully we'll get more of his thoughts on the matter laid bare in the coming pages, because right now it's kinda early to call it either way.

You don’t need to have malicious intent to do shitty things. That’s why the saying goes “the road to hell is paved with good intentions”. Think about how he struggled to accept she didn’t like him anymore. And maybe he’s just doing it to feel better and rebound, but it’s still very much rooted in him needing to have an effect over her. She tried to pull away physically from him multiple times, she still showed kindness and care to him in his vulnerable moments, and he saw his in. Like, he just got dumped and immediately goes in for a move, after disrespecting her personal boundaries multiple times that night.

Well, that and at the same time, I get kind of the feeling that Mike has a bit of his own identity crisis. Who is mike if not "Sandy's Boyfriend" even if Sandy wasn't around? He seems to lean heavy into valuing himself based on relationships and how he relates to certain others. We've known those who just "Have to be in a relationship" of some sort, even if it's not working out, because it's an identifier for them, and some crave to have that identifier, even to the point of forgetting that "Single" is also a valuable one as well. In some ways I think he liked having the "Girlfriend Sandy" excuse because it had it's benefits. Keeps him from actually needing to worry about other girls trying to get with him because he could hold up the red flag... but at the same time, that devotion can be admirable to some, even if it's not healthy in how he took it. Granted we don't have enough of their mental states to get the full picture yet, so plenty of options.

Both of you are stupid.

I like the use of thier scarves. It looks like Lucy tries to take control of the situation in the forth frame. But then in the fifth, the extreme angle she was in was a total dominance move on Mike. I'm probably reading into it to much lol

Both of them are running on the extreme emotions happening here. I doubt Mike is purposefully being scummy, because hes still super upset, but the rebound kiss is hitting that scummy threshold. Lucy being caught up in everything and accepting the kiss also makes sense seeing as this is the first actual conversation they've had and on some level she still have feeling for mike, whether good or bad ones, and in the moment just went with it. They are both teenagers that are hormonal and emotional, and there is plenty of emotion happening this day for them that they need to figure out how to work through.

Lucy probably wanted this back in the day But now doesn't want it.

I'm glad Lucy stopped it, but lets not pretend she wasn't into it, you guys. If she really didn't want to be kissed by Mike, I'm sure she would've pushed him away before he got the chance. Lucy's shown time and again that she can stand up for herself just fine. Was it inappropriate of Mike to do? Absolutely. Is it against Lucy's will? Not at all. And yeah I can see why people are calling Mike manipulative, but idk. Idk how clearly he's really thinking right now - seems to be all emotion, no thought.

Yeah... Like, I agree some of the methods are there, but the real thing to consider is whether or not Mike is intentionally being manipulative, and that's... not an easy thing to really glean. It might be something that comes up soon, and if it's truly unintentional, he'll be in a pretty good position to start working on it himself, or potentially with the help of his friends. I could especially see Paulo being pretty supportive seeing how much he's matured as of late.

hehehe!! ahh this is actually really cute omg.. well that went as well as you could have expected XD

haha oh god, they really got into it, huh? (GEEZ EW)

I guess this means their back to 1:1?

This teenage angst is weighing on my heart

You know sometimes it takes a stronger person to say no. Even if she likes it, deep down she knows this is wrong for her. If anything, what’s best for her is to get away as far from Mike as possible. I know that I really don’t like Mike and its just a comic, but I always feel like he’s always dragging Lucy with him into his drama. At this rate, he may make more romantic advances to dominate Lucy and she’ll be too weak to stop him. So, tell me, how’s that called love?

THANK YOU FOR SAYING SIKE

She didn't say it as coarsely as you did.

A win is a win

Well it's hardly compassionate towards her. She may be more tolerable than Mike lately, but she still has feelings she's working out.

Yeah exactly what I expected, there’s no way they could just get back together like that, Lucy’s doing the right thing.

Ahh, sweet relief from the (admittedly completely irrational) fear of it all ending on that last page

Way to catch yourself there Lucy

Now to let the fresh wave of teen angst settle in

*meme voice* good for her

Despite the circumstances, I'd make a bet that this kiss will start a dialog that they DESPERATELY need to have.