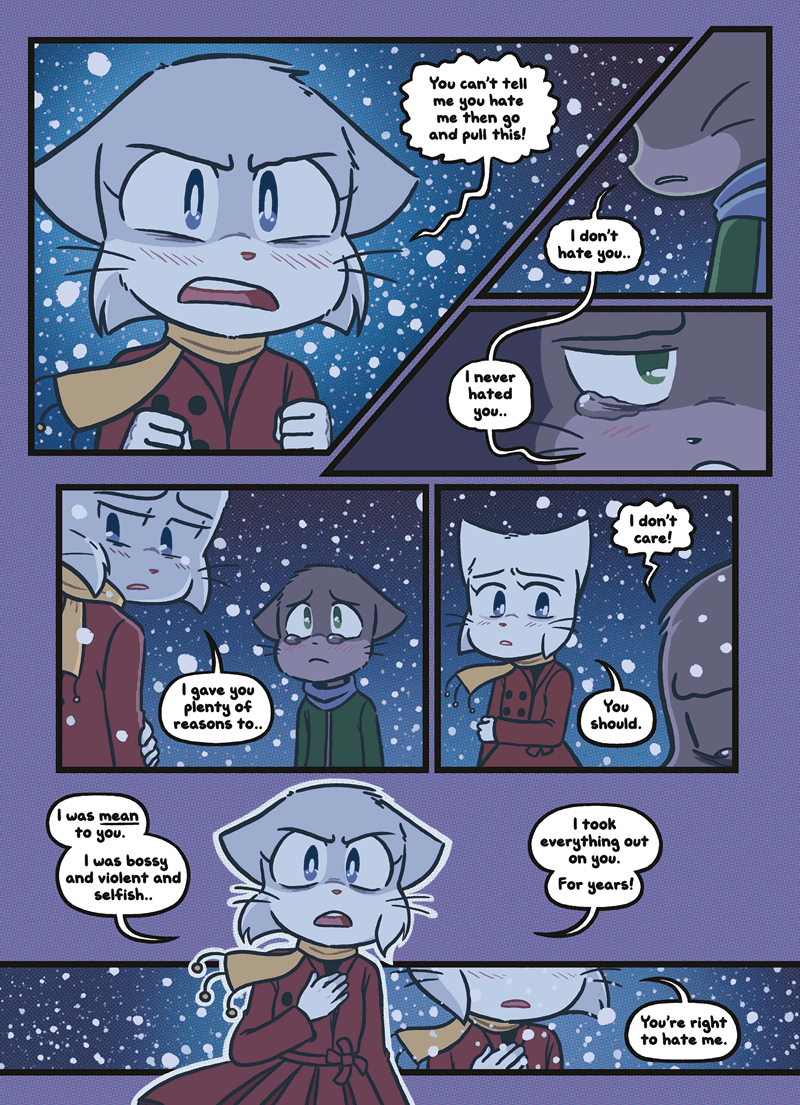 Veronica: this page makes me feel a little ill

Look at you Lucy, we're so proud you and how much you've grown.

INCHERESTING... Lucy I'm so proud of you

The development..Lucy, good job!! I am so proud of you!! But for what it is worth, it's up to Mike if he hates anyone or not. it's his decision to make. (and on the other hand its also Lucys decision if she hates Mike or not despite giving her reasons to)

it’s called therapy Mike. And also she’s right you can’t tell someone you hate them the way you did and then flip. Also considering you only started acting like that BECAUSE OF YOUR GIRLFRIEND -.-

Oh no. Lucy baby no don't make this about where you went wrong, youve already acknowledged that. I'm really hoping that all of Mikes boundary stomping doesn't get him exactly the validation he was looking for.

I feel like they've needed to have this conversation for a long time though! Lucy acknowledging her mistakes and how she treated him poorly, but then showing how she has changed from who she used to be. I'm pretty sure this dialogue is going to be her accepting that she never should have treated him that way but that she also will not let him back into her life without him changing too.

This is a very good way to look at it! And I hope you're right. I guess I just worry that Mike will cling onto that admission and lean into blaming everything on Lucy again.

"she also will not let him back into her life without him changing too."

ooooh, I love that!

I'm so proud of her growth and admitting what she did wrong but I hope she doesn't hold onto that guilt.. he also didn't treat her well.. he only wanted her around when sandy wasn't paying attention to him and he basically told her that all her friends would abandon her and didn't care if she was alive or dead at the time.. so screw mike

Mike: But I don’t hate you, I liked it when you were mean to me, it kept me from going insane.

Oh, you never hated her? Why did you call her a parasite? Why did you tell her she would be abandoned by everyone if you didn’t hate her? You don’t say crap like that to people you care about, Mike.

I really want to see how this ends Mike has not yet apologized for how he's responded which is what needs to happen however it is amazing that Lucy was able to hold accountability herself.

Lucy has grown so much, just cause shes validating Mikes initial feelings because she did in fact mistreat him, is not giving him room in the slightest. Merely stating her flaws. However fuck off Mike

Lucy holding accountability is cool and all, but I’m hoping this becomes more about the shit Mikes been pulling for the past 40 chapters.

Everyone else will be doing that. It's up to Mike to own up to it once he sees them all again.

Have this conversation then y'all have a chill moment.

I want to believe that this is going in the direction of “you had every right to hate me, and I have every right to move on from you now.” I like accountable Lucy. I don’t feel like she’s blaming herself, but rather acknowledging where she was flawed.

Lucy is so emotionally mature now, She's taking accountability and I'm so proud of her.

Mike, you absolutely DID care that she was abusive! You still do!

And you're RIGHT to be hurt by that! You gotta stop lying to yourself, dangit!

I'm so proud of Lucy for using the tools therapy has given her and actively working on being a better person. Since she has gotten back, she hasn't shied away from admitting the things she has done and accepting how bad they were. That said, Lucy absolutely needs to stand her ground and not give Mike an inch. She doesn't need to be here for him.

I can see that this is where things start to...sort of mend. Sort of.

What I see from Lucy, acknowledging her flaws, they're digging up valuable history needed to finally get to the actual heart of the issue. Honestly, the ball's going to Mike's court. And I think I can see him apologizing, legitimately this time.

Let's not kid ourselves, in the past, Lucy really was abusive, punched him alot. It ended up being QUITE crazy. As a result, he snapped. He snapped, and went all out in squashing the problem. He saw no redemption and lost it. He went too far, and has spiraled further ever since since he felt like his friends always prioritized Lucy over him from the start. And to be fair? They KINDA DID. And they apologized. The ball however, is back in Mike's court. It's BEEN there for months.

This may be his one and ONLY shot to do it though...guess it's a mission to wait and see!

Ok. I appreciate the use of "I" statements and such but Lucy oh boy. There had better be a direction to this that doesn't just list off flaws you've grown from.

This isn't just Lucy digging at herself - this is her pointing out why she can't just brush off what Mike said. He brought up all of her worst traits/behaviours, and for all she knows, he'll bring them up again. Heck, he behaves as if she hasn't changed ever since she came back! She needs reason to TRUST him again. Trust that even if she has flaws, Mike won't weaponize them against her ever again.

You know it's not often that we read so much dialog coming from Lucy. She's always kept to herself so reading her point of view of things between her and mike and not from someone else is so much better

Someone get these kids some therapy. Though I can see them being friends again after this.

Where the heck is Sam when you need him?! Come save Lucy, Sam!

I like how mature Lucy is being in this conversation; I think Mike is instinctively defaulting to how he's acted with Sandy, just dismissing every actual problem between them out of fear of destroying the relationship altogether. Of course the reason you don't do that is that the resentment builds up and explodes, which is what has happened with every single relationship Mike has had.

It's interesting because, in the end, these 'cats' are all teenagers with teenage feelings. So it makes sense how Mike is reacting because he figures that if he just says it's not as bad as she thinks it was, they can be friends again and he won't be alone. Poor kid needs a therapist. I'm a bit hoping that his sister maybe got his parents and they're out looking for him to find him to get him some help that he actually needs. Lucy, having had help, is trying to be mature, knowing they can't just 'go back to normal' but it's not her job to fix him.

I find the notions that Lucy is being too hard on herself and that it needs to be more about what Mike did...kinda funny?

I'm NOT saying that Mike didn't fuck up horribly. Of course he did. He played a big part in Lucy trying to kill herself and has been alienating his friends away with his outbursts...although I do believe he truly never wanted her to actually hurt herself, going by the fact that the guilt has been clearly eating him alive ever since. Still though, Mike was a huge asshole and yes, that needs to be acknoweldged.

That being said, Lucy has a point - Mike was absolutely right to hate her because she treated him like garbage a lot of the time, although I truly don't believe he ever hated her. In fact, many of Mike's friends used to treat him quite poorly - for example, the whole "cheater" mob thing started by Paulo and Daisy basically going "fuck Mike's feelings, I wanna be with him" with that whole stunt she pulled at the carnival (hence why I can totally understand he'd be paranoid about their reactions to his and Sandy's break up, even if they have matured). So, like it or not, Lucy is very much in the wrong here too, even if she did try to kill herself. Hell, none of these kids are innocent and they've all been pretty terrible to one another at some point, but that's a story for another time.

I think it's important to acknowledge here that their friendship was codependent and unhealthy on BOTH sides - they both were obsessed with one another, they both depended on each other way too much for happiness they couldn't find in themselves...and while Lucy was heartbroken by Mike's rejection, it was obvious (at least to me) that Mike never got over Lucy and felt so guilty about having feelings for both her and Sandy that it, combined with how he began to resent her for being an abusive friend, caused him to lash out at her.

Let's face it - both Mike and Lucy are deeply emotionally disturbed CHILDREN. Yes, children. There is no doubt in my mind that they always have, and probably always will, care very much about each other...but their individual psychological issues make a friendship or even more between them at this point impossible. I think Lucy has grown up enough to finally realize this, though, and this is why she seems to be not only owning up to what she did, but also warning Mike by reminding him of how she treated him...and I'm so, so proud of her for getting to this point.

But yeah, these are two kids who've hurt each other immensely and have made really, really terrible decisions that only people that messed up can make. This talk, from what it seems, is a good step in the right direction for healing for them both, however. This talk needs to be about how they've both hurt each other if they want to get anywhere constructive.

I'd give this comment a gold star if I could