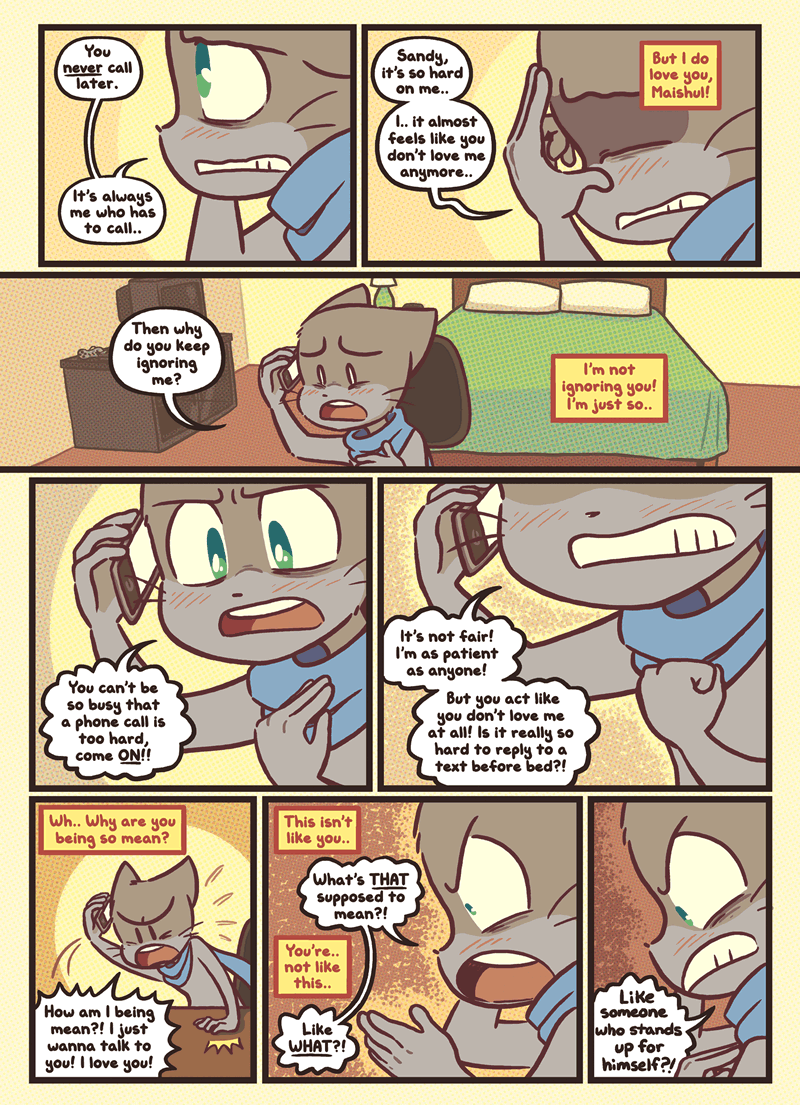 Veronica: maishul, you aren’t begging and apologising, do you have a fever…

There you go Mike! Letting her finally know how you feel, wish you had done it much sooner

I FEEEEL this!!! Good for you, Mike

omg i thought i’d never see the day...so proud of my boy

Wow! I think you REALLY need to tell how you feeling about your relationship with sandy! So just continue

and now we wait for the "Goodbye, Michael." ; she wont even call him by Maishul.

Interesting how Sandy isn't really responding to ANY of his accusations. I mean, it's obvious that it shouldn't take anyone weeks to respond to a text message, and she doesn't really have an answer for that, so she's starting to play the victim...

Definitely an attempt to divert his justified frustrations into him needing to defend himself. Sandy has some introspecting to do after this one.

Ouch that must hurt

Was it why she chose to be with him? Because was so accommodating?

Great! Now when he's done he just needs time to heal and then he can work on apologizing to his friends.

And giving Lucy the proper apology she actually deserves.

the 'youre not like this' definitely leads me to believe she was used to him being accommodating for her that she is surprised he's upset and confronting her. which is interesting because we already KNOW she's aware she doesn't treat him well

Lapdog? Lapdog! Why are you barking? Wag your tail some! Lapdog! Stop barking!

This is so needed! For once, it’s nice seeing Mike get angry. The veil is finally starting to lift, and the real source of his anger— his girlfriend treating him like crap!!—is finally becoming clear to him.

Sandys attempts at redirection here are very interesting, especially because we KNOW she knows exactly what he’s talking about. Her tears at the end of their last visit and her cryptic talk about how she knows she’s been bad to him on Halloween reveal as much. I’m dying to hear her come clean and actually explain her perspective on this. My bet is that she DOES love/care for him, but only as a friend...and she’s been too ashamed and cowardly to own up to it, so she’s been avoidant instead.

oh my god its finally happening

whaaa???? Mike making sense??? did they change the author or something?

I feel like this conversation needed to happen forever ago but I feel bad for Sandy. She didn’t know how bad he felt because he never told her anything was wrong. Communication matters, folks!

Oh no... Im glad he is telling her how he feels but it feels like he is going to blow up on her and she's going to feel like this is coming from left field since he has always been so complacent with their lack of communication up to this point. Sandy shouldn't have taken his lack of complaint for granted but Mike should have communicated how he felt ages ago.... young love , what a mess.

HELL YEAH MIKE FUCK HER UP

mannnn...I don't know for sure if Sandy does this shit intentionally, but she is damn good at it 👀💧

MIKE GO OFF. SHARE THOSE FEELINGS. STAND UP FOR YOURSELF! This cannot go wrong

Mike has had enough, he's so emotionally drained by this lack of communication that he has to speak out. He gives all the attention but receives none in return, he's emotionally starved from this relationship which is why he's all ballistic on everybody. He's super frustrated and becoming emotionally unstable.

Ooooo were headed for a storm bois 👀

"Your not like this" translation: "You never brought this up before, you never said that this bothered you. I can't know you are hurting if you don't speak up. Rather than have a discussion about it, you are attacking me and you have never done that before"

I'm thinking the translation really is what Mike says it is. She's used to him not standing up for himself. He's brought up her not talking to him being a problem before, but he willingly swallowed whatever excuse she threw at him, but not this time.

But yeah, I can see how that *technically* does get filed under "you never told me this bothered you so much" but there does have to come a point where Sandy is flat out ignoring him (I mean, it really isn't that hard to shoot a quick text before bed), and she HAS to know that isn't okay on some level.

Mike did ask to speak with Sandy a couple of times. Like every time Lucy turned him down since she came back, he texted Sandy. But after a couple of tries, he gives up.

Sandy has completely outgrown this relationship but stays because it's the only thing she knows. Her mother is so controlling, but having a boyfriend that is long distance and she sees essentially... once a decade, and rarely talks to is permissible. Yes, she is super busy but also they just don't have much to talk about anymore. Sandy's life is so different from that of a normal teenager and Mike puts her on a pedestal, it winds up being just Sandy bragging about her day and Mike "ooo-ing" in agreement; but it seems Sandy is so exhausted lately she doesn't really have time for that either. I mean, Mike does call her but she almost never picks up. She's clearly ignoring him.

I'm glad that Mike is standing up for himself, but much like with Lucy, he bottles in his emotions until it is too late, then he explodes. He needs to learn to address issues before they come to a breaking point. I wonder how Sandy will take this. He's dealt with this for years and she doesn't even know. She's in another country and she's getting a call at 4 in the morning from her boyfriend that she hasn't heard from in two weeks going off on her suddenly.

I will say that this is genuinely how a boy his age with his “general personality” reacts, we bottle up until someone finally takes it just slightly too far and it breaks. It’s all sorts of unhealthy but it is a normal response that a lot of introverted teenage boys do (at least from personal experience)

Oh of course! I mean, I even have done this myself before! I was just making an observation and I totally agree. It is rather normal to not want to start confrontations or feel like you can "take" it. It's just not always the healthiest response is all!

I've not seen such bravery!

It makes sense that Sandy would be shocked to Mike suddenly acting "like this" since Mike's prone to bottling up his emotions, but I feel like Sandy HAS to be aware of what she's doing. That page back when Sandy visited Mike and they were in his room and Sandy was crying saying that Mike was "too nice", has to allude to how she's been aware that she's been a terrible gf since before then. Like Sandy, girl, you can't use the oblivious card now :/

Actually, she even said she knows she's been treating him poorly during the "Witch Hunt" chapter

Honestly, I can see it from Sandy's POV that it might seem extremely harsh and out of left field. Knowing how Mike generally handles sensitive matters, this is guaranteed to end in a disaster as he just completely explodes at a situation that he never even previously hinted at. When I first started reading years ago, Mike was my favorite character, but I legit think he's my least favorite at this point. I get he's a teenager and teenagers are dumb, but how dumb do you have to be to keep making this mistake? Literally minutes after doing the same thing to Paulo? Ugh

I really hope I'm not supposed to feel bad for him when this inevitably ends poorly for him. I'm cheering for Sandy.

I wouldn't say he never hinted at it. There were a couple of times when he tried to contact Sandy only to take it back after she didn't respond for a long time. Like right after Lucy said she didn't like Mike anymore. Even after the last Halloween segment, Mike went on about how much he's looking forward to hearing about her career exploits.