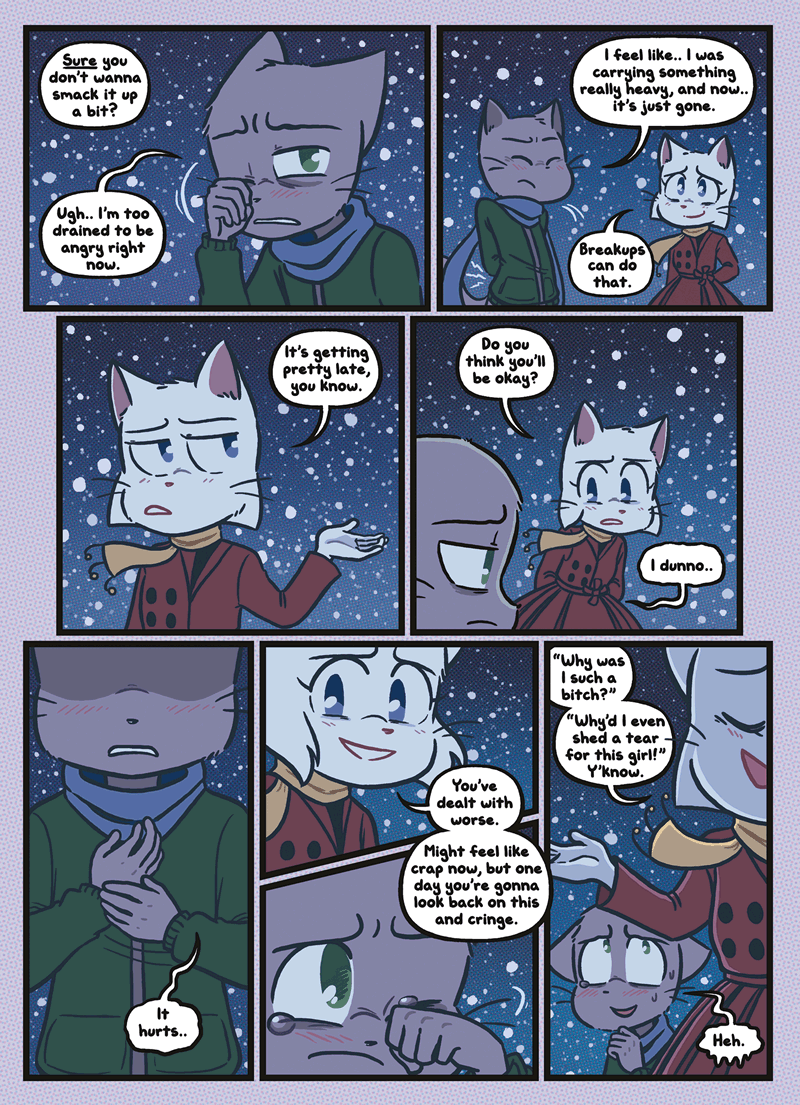 Veronica: I mean, she could go on!

BCB makes me so happy every time there’s a new page. 💕

Oh my god, Mikes expression is adorable in panel 2

Lucy spitting facts. Mike is gonna look back on his behavior years from now, and curse himself.

True, he might not. But if he doesn't, it'll be in spite of all his friends pushing him to move past this and develop. He may still have fond memories of Sandy in the future, and may even get over the break-up and reach out to her as a friend later down the line, but if Mike finally starts actively listening to his friends and understanding that all their advice really does come from them caring about him, the odds of him moving past his old mindset are high, and makes it more likely he'll feel ashamed of his actions. Hell, it almost looks like he's ashamed in the last panel in this page, which would make sense, because the whole reason the break-up even happened was because, despite trying not to, Mike internalized what his friends were telling him and spoke up for himself on the call with Sandy, clearly stating the problems he's had in their relationship; things all his friends had been asking about up until that point, culminating in that last argument with Paulo. Despite all his words and actions to the contrary, he really did care and value his friends' opinions right up until the end, and now that he doesn't need to actively push back against their advice to keep his relationship together with Sandy, there's a much better chance that he'll start making much healthier decisions in his life from here on out.

I agree with Lucy, Mike should call it a day. Time will heal wounds but won't get rid of the scars.

god Lucy you’re too good for him

Mike is going to realize that’s how she feels about him and that she did move on from him and he might not be able to handle that.

Yeahhhh she's speaking from experience on the looking back thing and he's not gonna like that.

I wonder what's gonna happen now? Is Lucy going to have Mike back in her life or continue to move on??

Might be a little too soon for that kind of humor, Lucy. ^^; Hopefully Mike takes it with a grain of salt and truly can laugh it off later though. This whole conversation is a great start, and I hope he can move forward now happily with everyone else. <3

I wonder if those were the same thoughts she had about him?

really though, I hope she's right! I want to see Mike leave this chapter behind :( obviously not every part of his recent shitty behavior was because of his relationship with Sandy, but I think a lot of the barriers that kept him from realizing how poorly he was treating his friends will come down if he doesn't have Sandy to defend, y'know? and that would hopefully make it way easier for him to learn and do better

The shape of that last speech bubble makes me realllly nervous that he's gonna say something shitty. That's the shape they always have when he's getting really toxic.

I think this is more trying to convey a sort of "Oh shit, you're kinda at that point with me, aren't you?"

Is it wrong for me to want these two Together when they Grow up?

I really, truly, hope that's not what happens. I'm all for them becoming friends again if Mike is actually sorry for what he did and works to correct it, but Lucy would have to have some kind of massive self-esteem issues to get romantically involved with the guy who drove her to attempt suicide. It's not like he gave her a cold and she eventually fully recovered; the mental state he helped put her in led to major depression, and that's something that someone likely has to cope with for the rest of their life. There often is no "fully" recovering from it.

Why would anyone want to be with someone that vulnerably and know *that's* in their history together? It was pure *luck* that she didn't actually die from jumping. How can you be with someone knowing how they made you feel and that a dice roll is the only reason you actually survived it?

I don’t like the feel of Mike in that last panel. There’s still 17 pages left in this chapter… I have a veeeerrryyy bad feeling Mike is about to continue being a little bitch and attack Lucy to try to make himself feel better rather than confront his past with her.

Now that he’s not totally hysterical, such a heel-face turn as to not continue being the absolute worst might be a bit much character development in a single night… the weight might have been lifted, but perhaps Mike’s still the same shitty friend he was while carrying it…?