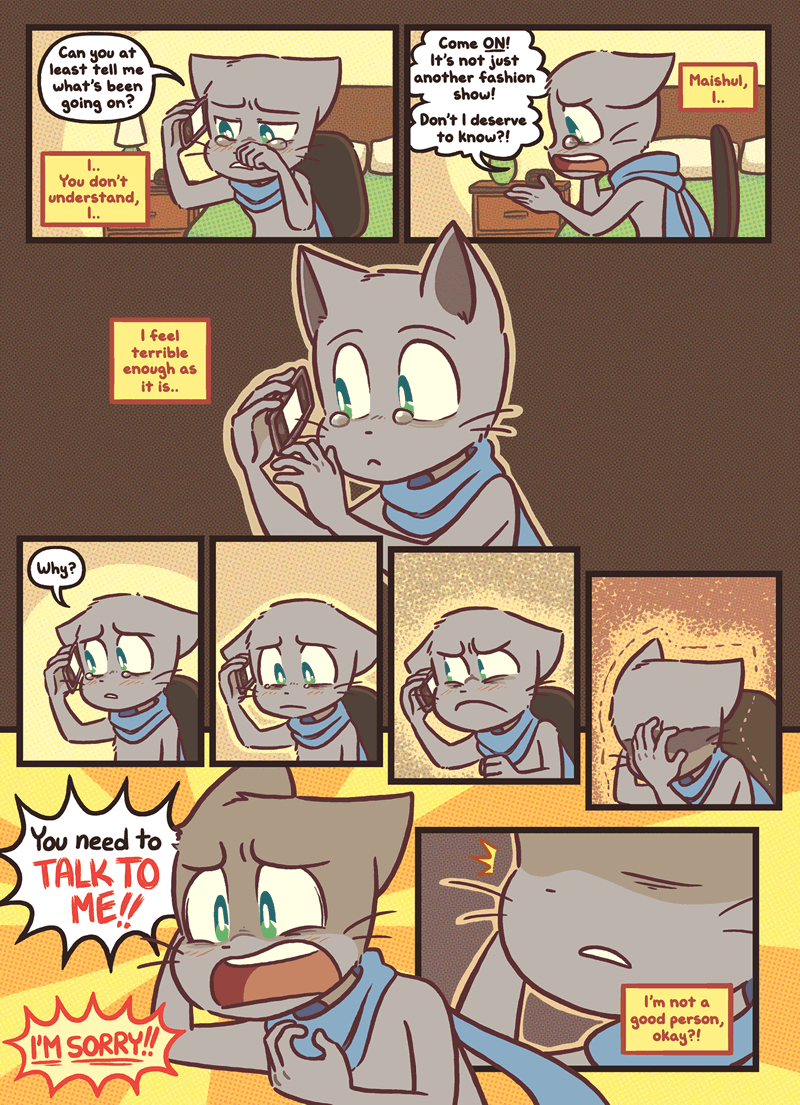 HAVE A CONVERSATION, YOU STUPID-ASS KIDS

You haven't been a good person since day one, Sandy!

Well, this is gonna go poorly

wHy DoNt YoU jUsT gRoW uP sAnDy

Maybe her parents set her up with someone... and she didn't think she would like the guy but now she does and he's actually in her life... I def getting a cheating vibe from this..

Another thought.. What if she's saying she "feels horrible enough" and "isn't a good person" to actually guilt trip Mike into submission? Like, what if she is just a really manipulative girlfriend (she might have learned it during her modeling career) and the reason she disliked Lucy so much is because Lucy was basically playing with Sandy's "possession/toy" or w/e. This is probably not the right train of thought but I felt like I wanted to put it out there.

If in the next comic we see Sandy put herself down so much and start crying/saying that she should be a better girlfriend and then Mike has to comfort her and make her feel better, thus also making Mike feel like they are finally 'communicating', then she's just a manipulative pos.

Totally taking bets that she's cheating on him.

That would explain why she never has any energy or time left for him.

But how hard would it have been to just text him a break up message and an apology?

That would have been better than stringing him along for a little over a year.

She's cheating on him with the Big Valbowski himself, Val Venis.

I’m losing my mind with anticipation!!!!!!

I am genuinely starting to wonder too if she’s cheating on him (or at least very nearly did/has been daydreaming about it). I thought Paulo’s comment on Halloween about her sleeping around might be an angry one-off quip at the time, but Paulo actually has some decent emotional intelligence and good people skills. There are some signs, and to be frank, she’s kind of in the perfect situation for it. Sandy is established to be extremely beautiful. She is working in a very adult-oriented industry, surrounded by equally beautiful and attractive people...who are probably showering her with attention. She’s spending long hours and long days with them, taking long trips abroad with them (completely separated from both the prying eyes of her parents and Mike). She’s never had any boyfriend aside from Mike before, who she has literally been with since she was a little girl, and it has been established she gets lonely and depressed about being physically distanced from.

Plus, she’s also only 17 years old, and I sure know that when I was 17 I didn’t make great decisions and could be Very impulsive and selfish. Imagine you’re in her situation...I’m not saying it’s okay or justified, but I think it’s extremely easy to see how it could happen.

So in summary, this would make a ton of sense. It would explain why she’s acted so guilty and repeatedly told Mike he’s way too nice to her, and been afraid to talk to him or be honest. It’s a very shameful and scary thing to admit.

My money is in her male coworker Francis who she kept repeatedly bringing up during “Model Girlfriend”. Who wants to bet, lol? Maybe I’m getting ahead of myself and it has nothing to do with this though!

I wonder if she'll actually explain herself, or if she'll just end it? I think she might be to selfish to actually break up with him. She knows she's a shit person, so will she do the right thing? I don't want to see Mike beg for them to stay together...

Please let's finally get an answer! I don't think it's going to be the one we're all thinking about though...

I don't want to believe that she's cheating on him, but I can't imagine what else it'd be ;__; This is the second time she's referenced not being a good person / not being good to him... Unless she's just totally self aware of how poorly she treats him?

Ok, sorry, one more note that I just have to get out! It would be SUCH delicious dramatic irony if Sandy has actually been the one cheating, considering Mike has a pretty big complex about how he doesn’t want to “cheat” on Sandy.

Dude’s had nightmares for years about people calling him a cheater for liking two girls at once. He’s terrified of Sandy finding out he likes Lucy too and betraying her trust, but never even seemed to consider the possibility that...maybe SANDY was the cheater after all.

That’s the kind of teenage drama I’m here for, lmao!

Poor Mike is gonna fall apart if she is cheating. Not that we havent seen Mike in an emotional mess before but being cheated on just hurts so much more than just a normal break up, makes ya feel betrayed and makes ya think poorly about yourself. Not to mention you always think about it going forward into new relationships, just in the back of ya mind.

I know we've been joking about her cheating for a while but I kind of hope she isn't. Mikes been having a horrible emotional rollercoaster for a while and I think that would push him too far as apossed to her just breaking up with him.

Hashtag this girl is cheating you honor

"im not a good person" yeah no shit

Maybe she just fell out of love with him when he was acting childish? Or, could be both that and her cheating

I bet she's cheating on him and probably has been for a long time.

Cheating is too obvious, I don't think that's what happened, but she lied about something I guess

I really worry that Mike is going to hurt himself

If she was cheating then Mike will try to crawl back to Lucy. Mark my words.

Sandy's career is her entire life, right? What if she HAD to cheat (or at the very least very heavily pressured to) in order to get into that big Fashion Show that she describes as "life-changing big"? Or at the very least, do something very unsavory...

This certainly reads as cheating-vibes, but what if it's not that severe? What if it's simply a case of Sandy realizing she fell out of love with Mike and has just been playing along for his sake?

Oh no! NTR vibes coming up!

Maybe Sandy was trying to get Mike to forget about her. Out of sight out of mind. She might not think she is good enough for him and couldn't bring herself to respond back. Playing devils advocate here. Not on either side of this but this conversation is needed.