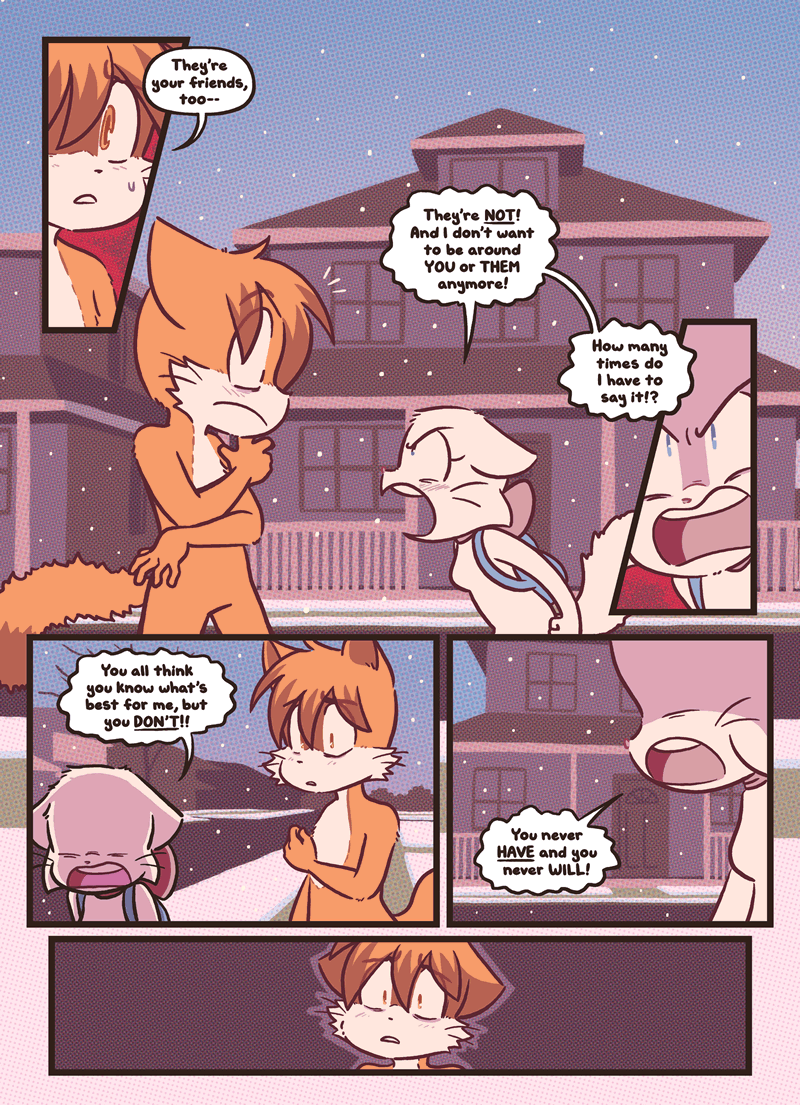 You can actually see the moment his heart rips in half

oh my god that hurts so bad

Omigosh you’re right. She was coaxed into so many things at some of her most vulnerable and unsure moments. Even when comforting Mike, she just gave him options without forcing him to do anything. I feel bad for her, this just makes me think of when she was arguing with Daisy about Augustus, and you can tell her pain when she’s just being misunderstood by friends.

EXACTLY!! she's right about them previously not knowing what's best for her, that's absolutely true. but they've grown a lot recently and I can't help but wonder how much better their relationships would be with her if she could give them a chance again :( ultimately it's not like a failing on her part to recognize a pattern of shitty advice and poor understanding of her feelings and needs, and to avoid them accordingly. but knowing what we know as the audience just makes it a huge bummer :') that, and this is clearly being influenced by her getting triggered, so she might not have jumped into wanting to cut ties if not for that.

Lucy you jumped off a rooftop, don't act like you know what's best for you either

i totally get where she’s coming from here and I understand why she’s so angry, but I can’t help but feel so frustrated with Lucy right now too. why did you even ask paulo to walk you home and look so sad when he said he didn’t like you like that anymore? clearly it’s not that simple for her. :(

The difficult part about growing up with friends is learning that you can't butt in like you used to. You don't know what's best for them and often they don't know either. Sometimes those friendships die. It's hard. It's always going to be hard.

Self-fulfilling prophecy from Lucy. And yet, when people reach out to try to understand, and are met with such hostility... maybe it's time for some self-reflection on Lucy's part. Whether she's strong enough to do it-- or to survive it-- remains to be seen.

She’s having a moment. She was fine with Paulo up until he admitted that they knew what Mike said to her. For her, no doubt, it reignited her insecurity about who her friends are. “He did this horrible thing to me but you’re still his friend?” Just recently she saw them yucking it up with him because Mike “fixed” his sandy issue. She doesn’t trust them. He told her they would stand by him and she’s seeing it real time even if it’s not exactly accurate. Poor girl is going through it. But rather than separate them from Mike she’s actively separating herself from them even if it’s not really what she wants.

This!! I can understand this so much on her part, this shit really hurts and needs at LEAST some serious repair of trust…

You know, I have to wonder if Paulo's "I don't even like your sister anymore" kinda added to this. . .

I'd hope she'd interpret it as romantically, but it's honestly upsetting me thinking back to that after hearing her say this. Why did you look so shocked, Lucy? She's not the type to enjoy being sought after in a one-sided way, is she?

Is this the Double Down?

Literally, yes. She keeps rejecting everyone who gets close to her. I've gone through this. I can handle this problem, I tell myself. I tell others the same. The problems worsen. I can't connect any longer. It took an intervention to save me. I wasn't suicidal; my problems were different. But the stubbornness was the same as Lucy's.

I hate how my post before seems to probably be right,..I do think however there will be a moment she will tell him as directly as she needs too or, he will not place himself in the position to get that information. I have a feeling these two will either get stronger or strongly spiral for a little after this.

I agree!!! Can't even depend on them to let her make decisions for herself!!! They're like "oh you know Lucy, it takes a while but she eventually opens up, you just have to get her to do things"... like, no. She did not have to do anything she didn't want to do. None of them understand her or what she wants or needs, they just think they do, and she's right

As the previous scene proved, DAISY sure isn't her friend. Who does that leave in the main group? Paulo is really close to Daisy. Mike is out for sure. Sue is trying, but doesn't quite get it, as shown with her play. Paulo can't claim that they all have her back when really most of them don't. He needs to stop speaking for other people here, saying he'd drop Mike if she asked, when really, it's much more complicated than that and he's Mike's friend too.

I also wondered who Paulo actually is referring to with this „us“ in „talk to us“. It sounds so nice when he says it, but when you actually go through every single person (that he’s close with) he could mean - Mike, Daisy, David? - it really IS understandable how Lucy is reacting here. The only one she really feels secure and comfortable right now is obviously Augustus. And yeah she‘s cool with Sue und Amaya, but even so it feels like she keeps a certain emotional distance to them.

I hate to say it, but my knee-jerk reaction would be exactly like Lucy's! I'm very inclined to agree with everything she's saying on this page!

Wow. I subbed for this page and I'm honestly aghast that she made it even worse. She's completely valid in her feelings that she wants to make her own decisions without influence. But... I feel so bad for Paulo. Basically told him straight up she doesn't even want to be friends with him, meanwhile he's just trying to connect on an emotional level and assure that he cares about her. But that's not what she's focused on at all. Paulo isn't gonna recover from this for a long time, huh? I hope she at least know that she hurt him, but I doubt she'll understand that unless he starts crying.

I hope he just leaves with a concise response to that. Arguing is only going to escalate things at this point.

Oh so thiiiis is the double down

Can we have Paulo snap at her like.he did with Mike?

I smell something burning.....is that a bridge?!

augustus was right, mike really did undo every little bit of progress lucy made for herself

Yes, she’s in a vulnerable place right now. She isn’t totally back to being glassyeyed, but it is certainly a big setback. Hopefully with support and continued visits to her therapist she can find her footing. But knowing that everyone knows what Mike said/did to her and that they are still close is a blow to trust.

Dude has good intentions, but he was forcing the issue while literally holding her in place, ignoring her first request to drop the conversation. Lucy lashes out when threatened or uncomfortable. He should have let her get to it on her own terms.