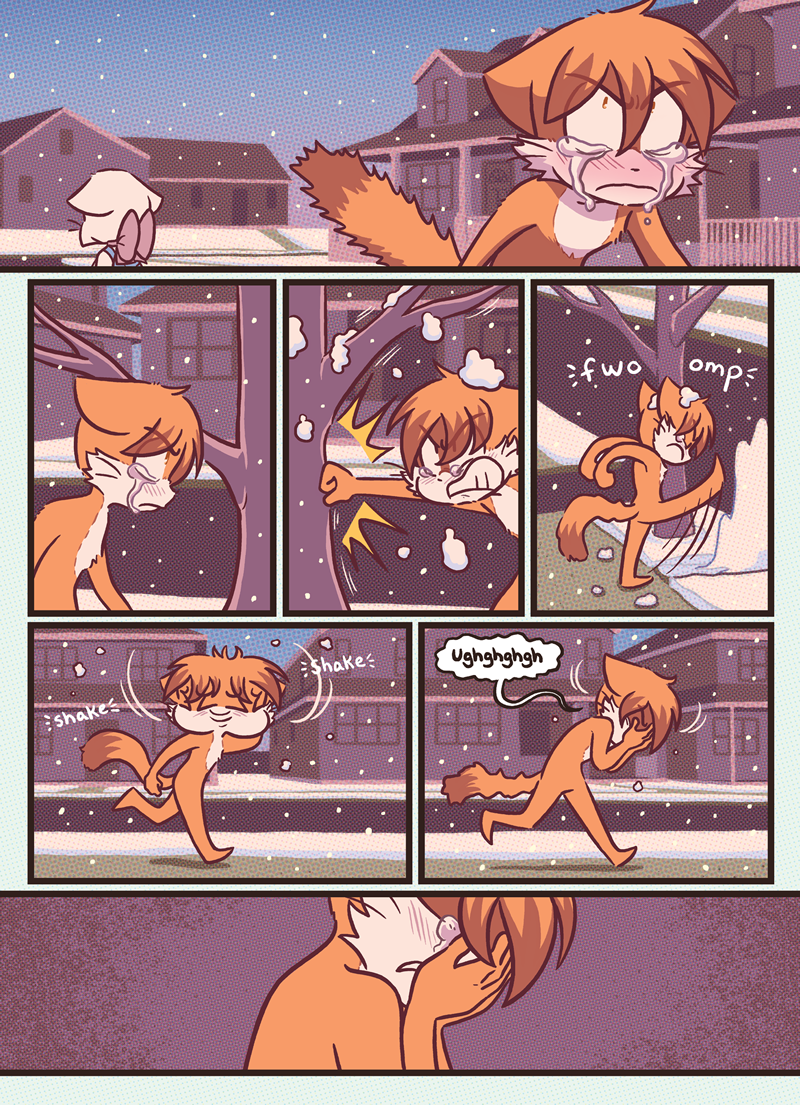 Veronica: love that impotent kick of the snow

That last frame.. It depicts his deep sadness so well. Well done Vero ??

All tears all the time with paulo…

I am beginning to adopt a "Lucy and Mike are the worst two people in this comic" mindset.

Mmmmm I want the seniors to drive by

Also he was super lying about not romantically liking Lucy

Paulo in this page is such a mood 😭

Paolo really tried to dish it out and forgot he absolutely can't take it, huh.

She burned him so bad that walking away was the ONLY option left for him.

Paulo :c i feel for both but in this moment feel awful for Paulo. He was just trying to help and be there for her but she shut him out just like she keeps doing to so many of her friends :( they don't know what she has been through but that's why Paulo is trying to understand so he can help. But Lucy still just doesn't want help. The only person who could get through to her at this point seems to be just Augustus. :/ oof.. that's rough :(

Yeah, I think he lost his temper and said some terrible stuff, but it stems from extreme frustration. This is the guy who wouldn’t sleep with Lucy when she was an emotional wreck because he knew she needed support, not being selfishly taken advantage of. When someone you know was in so much pain that they tried to kill themselves, you are almost certainly going to go out of your way, beg even in Paulo’s case, to get that person accept help in any small way that might make things more bearable. I’m sure he’s feeling guilty that he didn’t see how bad it had gotten for her and suicide is usually from a place of desperation, true hopelessness, and a certainty that no one cares or would be better without you. He was just trying to let her know a ton of people care and snapped when she used that intent to shit on all the people who cared but couldn’t intervene because of the arms length relationships she perpetuated.

I respect the empathy and many points made here, though you don't get extra brownie points from me for "not taking advantage of someone who isn't in a mindset to consent." Let's not forget the super long history of objectifying her very publicly and consistently not honoring the boundaries she tried to lay down. She doesn't owe anyone any explanations, they're her feelings.

Hurting eachother is not the fucken way. Dude MIKE the domino dumper fire that is their lives all because you don't know where your own priorities lie and who actually cares about you. Aaaahhhhhh so frustrating how this could have been prevented.

As a neutral party might I just say. First off these are all teens acting like teens and doing teen things. They're not thinking about how any of this actually works psychologically oh, so just remember you were a teen once and you probably do the same thing.

Second, the Mike and Lucy drama literally only started because there was no communication. Mike moved on and lucy didnt. Tensions rose and mike blew up because of both bad advice from *whats her face* and little support from his friends.

Lucy self-destructed because the only person she was focused on was Mike and not herself. And so will when she finally decided to move on she wanted to start over and her friends I constantly trying to bring her back and the thing is she doesn't want to go back. But also she is now doing the same thing that Mike did to her to paulo.

These poor trees keep getting abused 🤣

They had it coming. They know what they did

Might I also add that from Paulo’s perspective, Augustus is literally a creepy, antisocial perv who spent a year screwing with one of his closest friends? They have no idea about his home life or what he did for Lucy because, once again, she won’t tell any of them anything. I’d be deeply hurt if someone I cared about, maybe even loved, chose someone like that over someone who is bending over backwards to be there for her. It would be agonizing from that point of view and I don’t blame him for acting on that hurt and wanting to sever what seems to him like a completely one-sided effort.

My Patreon payment bounced so I didn’t get to comment on the previous pages, but here’s my two cents on the discourse around this whole exchange:

I feel really bad for Paulo, in that he’s paying for his own past trauma. He has repeatedly sexually assaulted Lucy and that’s why she never remotely trusted him. Unfortunately, his single dad never did a good job of teaching him what’s crossing the boundaries, and he got essentially bullied into his womanising persona by, it’s implied, Alejandro and Toby. He didn’t understand what he was doing and still hasn’t said sorry about it.

In addition, we really can’t hold the Rachel situation against him. While he didn’t know the details, Paulo could tell there was more to Lucy leaving than met the eye. He was seriously distraught, and *Rachel took advantage of him*. I don’t really want to hold that against Rachel, but he was obviously too distressed to properly consent and it set a bad undercurrent for the entire relationship. Now, Paulo absolutely did take advantage of Lucy backstage, but until it’s actually in-comic confirmed to be sex, I’m sticking to the information we actually have, which is that it was only making out. There’s a different level of severity between that and sex. If it’s ever confirmed to be sex, then pretty much all sympathy I have for him on this topic is gone.

Lucy has had every right to walk away, even the slap was justified, though it would carry more weight if she had reminded him of how he was constantly harassing her. Nonetheless he is trying to change and wants to know how to change so he can help, so she is to some extent shooting herself in the foot when she could expand her still-dangerously-small support network if she were to use this opportunity to set clear boundaries with Paulo. It’s a shame he sees him as untrustworthy rather than just stupider than a Lemming.

Yeah I would suggest rereading the redone chapters. A bunch of the sexual stuff Paulo did was cut as was the stuff with him having ties with Alejandro and Toby.

I agree with Fiver here, although the redone chapters still include some level of sexual misconduct or inappropriate sexual comments towards Lucy especially! only the absolute worst of the worst (mostly the groping) was retconned

Someone please give this poor boy a hug

i hope lucy stops going to paulo when its convenient for her at the time after this because every time she does this they get into a fight.

She could have found sue or someone else but she walked up to paulo, took him by the arm and then made a whole show about how they're platonic now so its fine. :( if you dont want to be friends w him anymore stop going to him.

She probably is keeping what happened between her and Mike a secret so Paulo and co. don't start another anti-Mike group like in Jr. high

Lucy's not innocent in any of this, but I can understand not wanting to be around the people at the table. The drama is intense

He's crying, because he hurt his hand from punching that tree.

Paulo's impersonation of a salty Smash player after he spiked his GameCube controller from losing the Grand Finals.