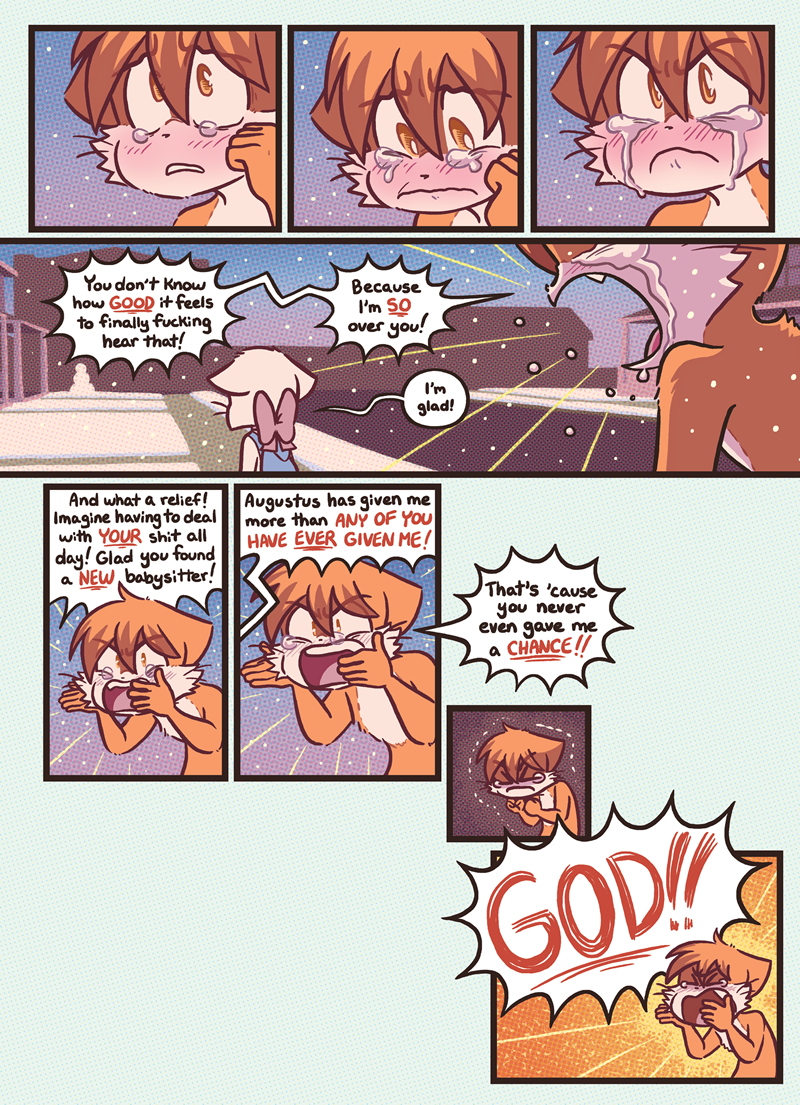 Veronica: Do you think Paulo’s the #1 crybaby in all of BCB? He must be, right? He cries so much! Emotions are always happening to the poor guy!

If only Paulo knew what Mike really did and why Lucy is acting this way I feel like he would have a much better understanding and needs to remember that he had plenty of chances to care for Lucy in the past but got so hung up on girls and having a huge crush on her that he didn't put the pieces together.

When she was in the middle of her depression, you were more interested in making out with her. Paulo, for once in your life, just walk away.

*reading the latest BCB webtoons* She literally did Paulo, then you went and slept with Jessica and Rachel lol

Honestly though! It fully feels like looking back on it, Paulo is only ever All In on Lucy when he can't have her or he's with someone else. When she's actually there and interested he fools around elsewhere. Even when he went to the fair with her he was zoning out thinking about Daisy until he got a No from Lucy again. This boy just wants what he can't have.

Yeah Paulo, you constantly sexualizing her for years and ignoring her consent is so telling

What a wacky roller coaster this chapter is lmao

Rip to this old ship of mine. You will be missed, but it was your time ??

Paulo is so adorable when crying lmao

Do the neighbors not hear this???

EVERYBODY STOP DOWN DOUBLING PLEASE IM BEGGING YOU

Lmao this kid keeps getting beaten TF up AAAA

Rip to this old ship of mine. You will be missed, but it was your time 😔

My heart can’t take this 😭

The only truth being spoken here is "I'm hurt". Ugh, these poor teens...

oh Paulo I love you but you've spent years exacerbating Lucy's insecurity that people only care about her for her looks. Augustus immediately rejecting her advances while still emphasizing how much he cares about her really did give her more reassurance than you ever have with the constant talk about what a hot piece of ass she is.

I’ll never get over him getting mad at her when she came back and was hanging out with Augustus and he told her “I waited for you” like no you didn’t?? He immediately slept with Rachel after he found out she was gone, and that was after dating Jasmin. Yeah it’s shitty she would go to him after a fight with Mike, but he was always an actual friend to Daisy and David, even Mike, more than Lucy

Also, one of the first things he says to her after she comes back? Comments on her boob size. Like, dude, growth is good, but realize you've been problematic and caring about someone only gets you so far if your behavior isn't great.

Two teens who care are

OAN this page ended very abruptly and it looks like Paulo is about to say something that crosses even more lined.

Man we're in so deep that both sides are at fault but you really don't want either to be because we know deep down that both of them are good enough people and deserve happiness. We want to root for the best for both sides but can't get even get one. Nothing here could feel like a win.

Every time there's a fight about how nobody cares about Lucy, I always think of the same character. The character that's always been Lucy's friend no matter what. Who's supported her, tried to help her, defended her, been a good friend to her:

SUE!! Nobody ever brings it up but throughout the entire comic, Sue has done her best to be a good friend to Lucy. She deserves much more credit. Her name should be on Lucy's list of people who've helped her

I think whats more frustrating than Lucy clearly playing with Paulo’s feelings, is everyone in the comments just glossing over that. She said she didnt want paulo fawning over her. So when she FINALLY gets that and hes not interested. Shes upset shes not desired like before and uses that against him in an arguement. She is 100% playing with his feelings and is stepping far further across the line than he ever did.

This!! Seriously, she has been playing with his feelings from the get go. He was always her back up whenever she needed to feel wanted. Yet would reject him every chance she got because she considers herself a terrible person. She was terrible! There is no lie that Lucy was a very toxic person. It isn't fair to her friends that she has such a negative opinion of them. She never really tried to reach out until things blew up in front of them and her friends had to ask at that point. Then she'd kinda just blow it over when they showed genuine concern for her. They aren't Mike's friends or Lucy's friends, they are all each other's friends! I know she's grown a lot but this is an aspect of her that she still needs to work on with her therapist. Her trust issues will be her downfall if she never learns to just be honest about her feelings in a positive, non aggressive way. Yes, Paulo did poke the bear, but his feeling for and about her as just as valid. These are two hot headed kids that need to work things out. She needs to stop being such a hypocrite. I'm sure if Augie were here, this convo would have been completely different.

How is grabbing her without her consent not crossing a line? And constantly sexualizing her not crossing a line? HER BROTHERS ONLY KNOW HIM AS “Paulo who keeps grabbing my ass and harassing me” because that all he used to do in the beginning. The first time he started showing any sincerity in his feelings was right around when she started getting depressed and showing signs of being suicidal. basically only after Mike fully flat out rejected her. I don’t condone what she did but that last moment together wasn’t a “i like you let’s make out” that was a “make amends with people around me before i end it” it’s why she agreed to do Sues play, it’s why she made out with Paulo, hell it’s why she apologized to sandy and finished her and mikes project on her own. When someone hits that point they are trying to tie up as many loose ends. She was done. And him bringing that up was just a reminder of how deep she had fallen.

And as far as her friends:

Daisy was too obsessed with Mike to care

David was too absent to care

Abbey and her rarely talked

And Mike was more concerned over his girlfriend being happy than trying to maintain any of his other relationships.

None of this is new info to Paulo though, he just didn't want to listen the first time. Lucy already explained all of this in the Ferris Wheel scene with the chapter where the went to the fair. She's only being a little shit now about it because he wouldn't drop the topic, stop grabbing at her, and started being disrespectful about Augustus. She wouldn't have had to bring it up again if he'd stop pushing her on stuff they've already hashed out before. She hasn't made any attempts to hit on him or jerk him around since that conversation at the fair.

What are you doing stop you're going the WRONG WAY.