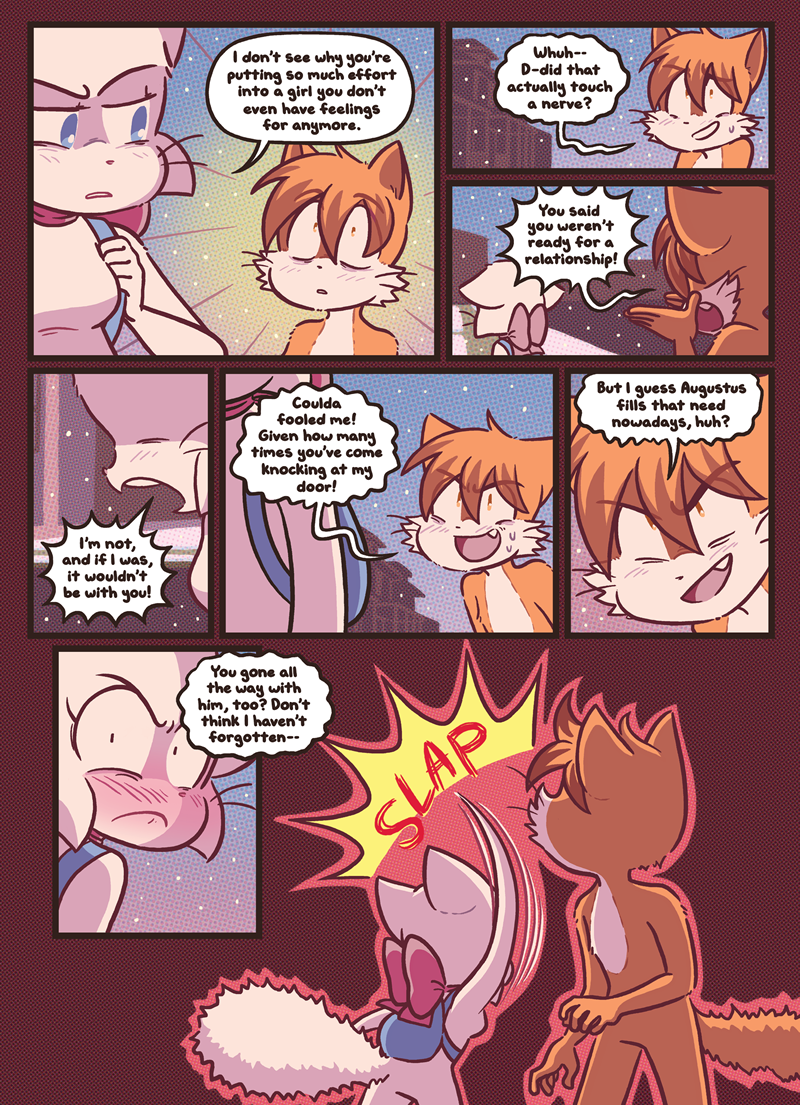 Man they know how to push eachothers buttons. Teenagers, ugh

Though to be fair, Lucy did TRY to do what she usually does with Paulo to Augustus

Today on the Bittersweet Oscars

This won the internet today

And all respect lost for Paulo

Me: I wonder if they are going to do some April Fools shenanigan's today!

Me after reading: Yeaaahhhhh no that's pretty on point.

HAHAHA I LOVE THIS PAGE

Don’t normally advocate for Lucy hitting people….but THAT was warranted!

Bro this is way less upsetting than the previous pages lol, I needed that one. Evil smug Paulo is the best Paulo. I cannot even explain why

augustus at the mall rn feeling a shiver down his neck

Every time I think "yep, there it is, the moment the chapter was named after" they keep upping the stakes!

I need to know what's next

Try to help, try to hurt, such is the teenage way

She came to your door once you prick, when she was severely upset. You really don't know her pal

No it was twice. When Mike rejected her and the play

too?? she didnt actually go all the way with paulo, he stopped that from happening? so whats he mean by too???

In "Curtain Call," they actually went all the way offscreen, apparently? It's alluded to in "After You" and "Witch Hunt," but I don't blame you for not knowing. I didn't know til I checked the BCB tumblr myself lol

@maybelle. I initially misread, but Im still confused because Im pretty sure they only made out in the curtain call scene. thats what she said to him, "lets make out". And when she came back she said she wanted to "tide him over" because she knew shed be leaving. I dont see how its alluded anywhere that she had sex with him when she literally only had a few minutes before going on stage

Link? I can't find it

It is implied by Paulo in witch hunt, especially since he said it was a hot night, but maybe he's going down a more "you're probably sleeping with him on top of hanging out" rather than they slept together. Maybe Vero will clear it up with an upcoming page though

I hope theres some clarification because as far as im concerned, Paulo saying it was "hot" is not concrete backup. I mean, when youre kids in highschool Id argue that making out, and ONLY making out with someone you think is substantially attractive is plenty "hot" all by itself, it just seems weird theres a whole chapter where they could have had sex that was way more obvious, and that if they really did have sex it would be put in so vaguely. Been reading for years and have reread so many times and never havr i once ever thought "ooh they had sex" especially when it was AT school and *minutes* before sues play started. I just dont think Lucy would do something like that in such a public place where someone could have walked in at any moment in regards to the play they were about to put on. I really hope its just Paulo reaching and saying it like "oh youd sleep with him but not me even though you keep coming back to me" kind of thing, but all the vagueness and grammar is really offputing and confusing because unless hes completely referring to a flashback of new information we havent seen before, I dont think it could have happened anywhere in the current existing archives, his "alluding" towards it doesnt really hold up for someone like me who reads so heavily into rhetoric.

I was worried about this page cuz this scene has been pretty emotionally charged thus far, but this is okay!!

April Fools! Lucy doesn’t slap Paulo, they both sit down and have a long constructive conversation about their problems 🤡

Or they walk away silently, keep a civil distance, and forget each other forever. Oh, but a fool can dream.❤️

Ok see now they're both in the wrong XD

Ok wtf is up with Lucy. Paulo is TRYING to help her, to be an actual friend and she brings up the fact that he no longers want her and she thinks she has a right to be upset over that??? Like dude I understand her point of view I really do but to continue to push people she's only gonna hurt herself more in the end. Paulo had every right to say what he said, she doesn't know how to cope in a healthy way and you know what, no one deserves to be shit on when they are reaching out to help. He's right she NEVER tried to talk to them never tried to have those around her understand. I love Lucy, she's always been my favorite but she needs a dose of reality

She A) has severe mental health issues, B) has just learned that Paulo stuck by Mike knowing what he did, C) is in the middle of a PSTD attack, and D) just had someone cruelly mock the day she was at her lowest. She can slap him if she wants.

And still, we have people here celebrating that toxic attitude from both sides.

well actually she did go to paulo for help when mike rejected her, it made her feel a little better but who was dhe supposed to reach out to and talk to when everyone had their heads up their asses about their gfs & bfs? daisy never cared about lucy or her state of mind so she cant talk to daisy about it, sue avoids all things "drama" and even though shes been supportive she came in the friend group late and lucy still didnt see her as one of her "friends" like she saw paulo and mike so shes not going to go to sue, she has no reason to turn to someone like abbey either for the same reason, and david doesnt offerany emotional support to anyone but paulo occassionally. she really only ever had mike, because she couldnt trust anyone because paulo was all over tessa and rachel and jasmine and that left lucy outcast. who was she supposed to talk to exactly? how would that help her? thats what mental illness is, its not knowing what to do or not being able to do what you need to

Ah yis. Now we’re just being hurtful to each other .

Paulo WHY? WHY would you say that?? Damn that was a shock

WELL I DIDNT SEE THAT COMING

Also WTF. The timing of this page is nuts considering what just happened on the Oscars

Paulo deserved that for those comments

Theyre both so insecure and dumb!!

They both deserved that

Well he did. She rejected him, he pushed her away, she got upset by it, and he tore into her because of it. Deliberately.

Good hit the boy that has been caring about you all because he talked bad about the person he doesn't know saved you. Who you have been intentionally hurting who just now did the same to you.

Hopefully... They will talk

Or go their separate ways

Or Lucy explains herself about August

Or slammed into the ferris wheel

Like when Daisy slapped Abbey for a similar remark (flashback in Golden Hour), both slaps had the effect of stopping the other person from continuing their sentence. I don't want to broach the morality of slapping someone for remarks. I think, from a dialogue-writing perspective, it's useful in giving a character control of the conversation.

I think from the night of the Play she was in before she left. I thought they just made out and he was able to like feel her up or something. It never showed or said what they actually did

that's what I'm saying, like when?? theres nothing clear cut that implies it anywhere that they would have done anything with each other other than kissing

Also when he finds Lucy and Augustus after getting his face slammed by Mike, he tells Lucy "he gave himself to her." I think the comic is purposely vague about it, but there were a lot of clues. I was on team: "they only made out" until this page dropped lmao. Holy debated topic on the discord.

Okay I think we can solidly say that Paulo is no longer even trying to help her, literally just shame and punish her for not wanting to accept help from him and the friend group that's been harmful to her right now immediately on his terms. I can see why he's hurt but I'm solidly disappointed in him. Lucy's definitely not the only one who's lost progress here.

Yeah, Paulo crossed the line. Overplaying his hand is to be expected from a late-teenager, but he may have grossly misjudged just how far he could get away with going.

And to our left you have a raging teenage dumpster fire……

Right in the kisser!

I'm cringing so hard omg. I know this is a defense mechanism Paulo but geeeeeeezzzeeeeee

no Paulo, just no

Oh BoY! ShIt Is AbOuT To GeT ReAl ReAl QuIcK!

Nice to see that Paulo is still the same ol' smeghead when someone rejects him.

The slap heard from around the world!

You can tell he's got unresolved feelings, and he's still sour by all the mixed messages she gave him. But Jesus Christ my dude, lmao

Let's be real here, not defending anyone, Lucy did just use Paulo for her own reason and played with his heart. Paulo even respected her decision to not go into a relationship only to hear to she would never be in one with him. They both have eachother an emotional smach down here