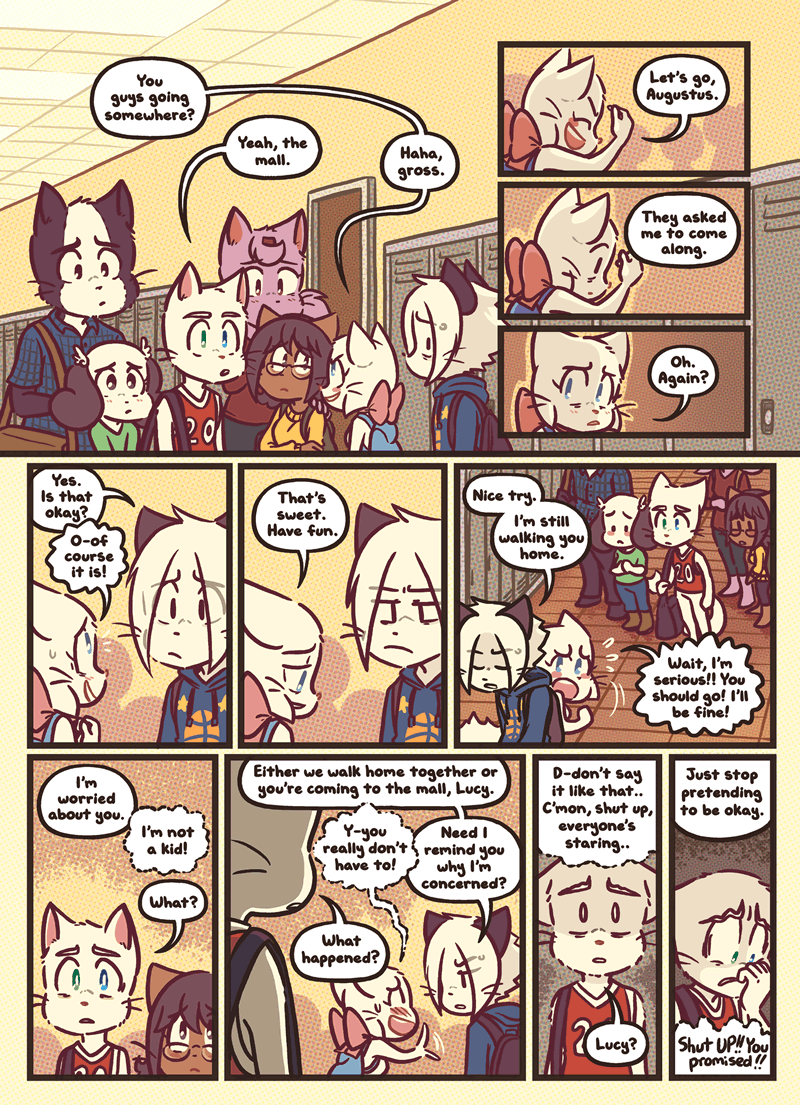 Wait does Jordan not know???

Ohhh man, Jordan is about to go off when he finds out.

Is... is double down going to be Jordan suddenly getting reminded that Lucy isn't 100% ok?

Oh no Jordan ?? I can only imagine how scary all of this conversation is to hear without context, considering what happened to Lucy earlier.

Looks like Jordan's finally realizing how little he's been there for her.

Jordan is about to have a mental breakdown

Lucy is so afraid of being alone and being left behind... But she's also afraid of holding people back. He's just now realizing how little he knows about her and what she's feeling.

Oh poor jordan he just wants to be a good brother

You gotta love to have everyone in the high school hallway hashing out your mental health.

August being a good brother

Double Down apparently means Augustus and Jordan are gonna from a Big Brother Protection Duo around Lucy. I'm here for it ??

Oh no Jordan 😭 I can only imagine how scary all of this conversation is to hear without context, considering what happened to Lucy earlier.

Double Down apparently means Augustus and Jordan are gonna from a Big Brother Protection Duo around Lucy. I'm here for it 😌

THAT ONE PANEL LOOKS LIKE AUGUSTUS IS HOLDING HER IN HIS ARMS SO CUTE. But I’m kind of ewbbwhs squinty eyes at him saying that stuff in front of everyone. If it was just Jordan I wouldn’t care. I GUESS ITS JUST HIM BEING PROTECTIVE OF COURSE????

Oh double down. Like double downing on watching Lucy and making sure she doesn’t do self destructive things/get into stressful situations. Oof…

Jordan realized that if his sister comes with them to the mall, she would humiliate him in front of his friends by beating him constantly in Marvel vs. Capcom 2 at the arcades.

man as much as i love augustus… i hate that he’s saying all of this in front of an entire group of people. i feel like jordan needs to hear it for sure and i’m almost certain that double down refers to him in this chapter but how humiliating for lucy!!!

I think this implies that Lucy has been ALONE this entire time being back. No one, not even her brother, has asked to include her in things. Only Augustus.

And, furthermore, I think that excluding her because of Maddie's insecurities is crappy. That's his *sister who almost died* y'all. I feel so bad for Lucy. I know she pushes folks away, but even basic human caring should have kicked in by now. It really looks from the outside she's just getting bullied, but quietly. Just excluded. Edit: and I want to add in that Madison's note of, "if it were me, I would want to keep an eye on them", is really meant to drive home the above. Even Madison, who apparently was just informed about what happened/was happening, is showing empathy and somewhat remorseful for being that way towards Lucy. But, in that same instance, Jordan and co. put Madison's feelings first - Despite it being clear that, you know, there probably is very good reason not to. It's a pretty great tactic by the author, tbh, to show what healthy empathy looks like vs. how the majority of the cast is treating Lucy.

Also, to be honest Maddie needs to let it go, Lucy was never interested in Jessica and never will be and she's done absolutely nothing to Maddie ever. Maddie is honestly just being immature and petty at this point.

Right tho. Like imagine trying to confront your friends younger sister and calling her a bitch outloud because you have a one sided jealousy with her 😭😭😭

Exactly! Lucy doesn't even know Maddie exists, much less CARES. She wasn't interested in Jessica anyway! It's bizarre behavior that *anyone*, much less HER BROTHER, was like "yeah, we're totes going to exclude the person who was literally driven to self-harm because the GF of someone who used to have a crush on her is big mad about it." Jordan should feel absolutely terrible - And good for Augustus to putting his friend first.

Yes. And while I know they are in high school, so maturity isn't even on the radar at this point, it still doesn't sit right with me that *all* of them just... left Lucy to her own devices? Didn't check in on her? After all the exclamatory worrying they did? They just shrugged and were like, "Better not rock the boat, guys! I'm sure she's fine lol".

Can't be mad about Auggy's behavior. He's just telling it how it is. No F*ck$ given lol.

That's kinda why I'm mad about his behavior

Yeah, but that's why I think it's a good idea to give some fucks. I think he actually very obviously gives many fucks, and he's smart enough to understand that if he keeps this argument public then she'll be less likely to put up a fight. He has consistently demonstrated that he is conscientious about the effect his words have on the people around him, from avoiding getting the shit beat out of him to knowing what buttons to push to get people to react, and it wound be genuinely surprising to me if he wasn't at least aware of the thing I suggested even if it isn't intentional. Is he intentionally making a spectacle? Don't know. Is he disincentivized from taking a more tactful approach to make sure Lucy doesn't walk home alone? Yeah, heavily. And I'm willing to bet that he knows it.

I almost wonder if it is because he has picked up that no one else seems to realize (or care?) about what has been going on. She's obviously not okay, and maybe Augustus is tired of seeing that and/or lifting that emotional burden himself. As bad as I feel for Lucy, it definitely isn't healthy to keep all that inside, even if (as I suspect) that is because she thinks she'll be a burden. Relying on Augustus so much is really a) hard lift for him, b) not healthy for her. This is just a really difficult situation all around.

Also, I wonder how much time has passed between this chapter and Burnt Bridges 🤔

I think Jordan is realizing he needs to be more than just kid brother and become a young adult brother. Anyone with siblings has experienced the *change* lol

Only August has been included or invited to things ...ouch for Lucy.

Auggie has to be frank with her like this, it's how she listens. It does suck that he's saying it in front of people, but everyone in their friend group and Jordan's friend group know about what happened prior. He hasn't mentioned anything about what happened recently, just that he's concerned and wants to take her home. There is nothing wrong with that. What's bothering me is that it seems like her brother/fam isn't paying as close attention to her as Auggie is. I don't blame them, if she isn't acting out of ordinary there technically is no reason for concern, but this seems to be proof that Jordan hasn't checked in on his sister or attempted to actually talk to her and see how she's really doing. Which, really, no fault of his own, he got really traumatized himself, he's trying to live his life as well.

I still think Augustus could be more respectful when she lays down a boundary. He could get the point across just as well in a much less public setting, rather than (either intentionally or unintentionally) using the very public nature of the conversation as leverage to keep her from putting up too much of a fight.

I'm genuinely big mad at this panel and how it is revealing how little anyone pays attention to Lucy, despite all the talk about worrying for her etc. Like, are you kidding me? You didn't even bother checking in on her? Y'all are just bullying/excluding her, and putting it under the guise of "oh but she's fine now." Ugh!

ppl are so odd suggesting that Lucy has been alone and completely abandoned by her friends/family, Sue and Paulo spent a ton of time trying to stay close to her and invite her to things and show they care for her. Lucy went out of her way to avoid her old friends and stick to Augustus, most likely because she's always felt safest sticking to one 'best' friend. it's repeatedly been a big issue for her and why she has trouble maintaining friendships outside her fav person

This, that she has defaulted back to focusing her emotional and social needs on a single favorite person is one of her bad habits. I don't blame her at all for a little bit of a backslide, but ideally she can lean a bit more on her other friends so Auggy can spend some time being a normal teenager too, vs being her peer primary caretaker. That is part of what burned Mike out over time.

I am glad that she is trying to encourage him to have other friends as best she can, but I hope she does reach out to Sue or others.

Edit: and I want to add in that Madison's note of, "if it were me, I would want to keep an eye on them", is really meant to drive home the above. Even Madison, who apparently was just informed about what happened/was happening, is showing empathy and somewhat remorseful for being that way towards Lucy. But, in that same instance, Jordan and co. put Madison's feelings first - Despite it being clear that, you know, there probably is very good reason not to. It's a pretty great tactic by the author, tbh, to show what healthy empathy looks like vs. how the majority of the cast is treating Lucy.