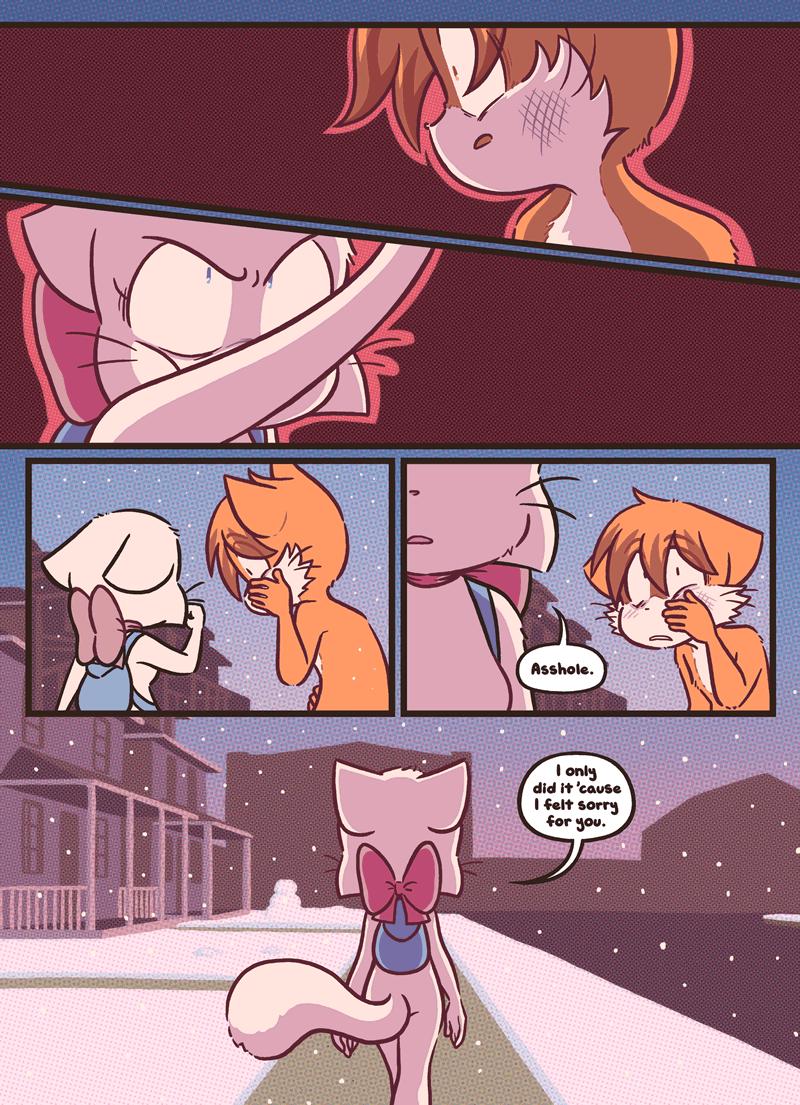 I think it’s a little more complicated than that…I can’t really blame her considering what Paulo just said tho!

She litterally yelled at Jess and Rachel for using him like this, so she definitely knows how this will hit him.

Holy SHIT, that's a devastating way to end the conversation. He's gonna be destroyed by this, goddamn!

(Totally didn't post this on the last update by mistake, no way)

Guess she sees it as smacking sense into him, which I can understand

will smith and now this…

And the hurting continues. Whhyyt can’t we resolve this already 😫

The sass walk though

So this is confirmation that Lucy and Paulo have gone all the way? I wasn't sure before but now.. I really must've missed that somewhere. Was it implied after the play? Was it in the short time they were back stage together? Was it in a side comic I missed?

Yep it happened during the play when they were alone for a bit backstage. A non-canon BCI vampire joke comic confirmed it (vampire Mike bit Lucy and was aghast to find she was not a virgin) and then in canon, it was heavily implied that they went all the way backstage when Lucy and Paulo were talking on the ferris wheel. And now we've got 100% definite confirmation in these pages!

I didn’t interpret it that way; I thought the “too” was more of a “You’ve been hanging around August so long, it must mean you must also be sleeping with him.”

But I could be wrong… I guess I’m just surprised it wasn’t brought up before.

Oh wow! I have to reread that chapter!

I figured the bci vampire joke was referring to the other bci comic "Another December" where they did go all the way. I Dont think the bci are canon to the actual comic. That's kinda the point of them. What if scenarios.

As real as she was messing around with Augustus. Which is only half-true at most. Basically she's trashing him back.

sorry, but if paulo tries helping her after that, then that is on him, unless she apologized that is...

Oh wow….. I have no sassy reply to that…

Jordan: "Paulo's someone I feel kinda bad for honestly."

It seems like Paulo is always trying to act a certain way than he actually is for appearance reasons. If he could just put all that aside and be who he really is I feel like he'd actually be able to say the right things.

Wow that was honestly such a bitch thing to say. This is what happens when teens are full of emotions and don't know how to handle shit

so wait... did Paulo and Lucy have sex in the dressing room in the play!?

I don't know. People in the comments seem to think so through context.. But im not completely convinced. He could be referring to when they almost did it in "Another Shoulder"

Eee-yep! Page 20 of After You mentions a BCI vampire comic that "makes sense now" - I won't spoil, but given the context, it means Lucy and Paulo did the do!

i though they just were making out in that chapter??? they DID IT???

Damn she just straight up lied.

Honestly, I feel bad for both of them. Lucy is trying separate herself from her old /"Ex"-Friends, and Paulo just wants to be there for her/be With her bc he thought that maybe she wanted him too. Lucy leading him on/giving him hope for them to be a couple wasn't cool, but as someone who was very much in Lucy's place before, I understand the whole "might as well give everyone what they want/make them happy before I go out with a bang" regardless of how it makes yourself feel.

Honestly tho, at this point they're just lashing out at each other just to hurt each other with their own hurt. They need to walk away from each other and maybe one day far in the future after some proper therapy they can actually rebuild a friendship again. #GiveTheseKidsTherapy'22

Honestly he had it coming with what he was saying

I think she means she rejected his request to be his girlfriend because she felt sorry for him. I don't know if it's because Paulo's so insecure, he needs to flirt to feel wanted, or Lucy's own baggage.

Lucy's currently struggling between her own self-worth and the things Mike told her that made her terrible. Lucy WAS out of control and mean, but Mike didn't handle it very maturely either. She didn't trust anyone from the get-go... Mike was the only one, and she was too "tsundere" to share her emotions in a healthy way. She teased him when he was nice, she hit him when he stood up for himself. There was just no winning! When he finally exploded, she... believed him at face value. It doesn't help that none of these kids know how to express themselves without screaming.

It's going to be a long time before Lucy trusts these people again, if ever. She was still bitter about Sandy despite her being out of the picture for 5 years.

pretty sure she's saying she only slept with him because she felt bad for him; in "after you," she admits that she was tiding paulo over because she knew she was leaving, so in this page, she's basically emphasizing that again -- but with the added insult of implying that SHE didn't "need" anything (in reference to paulo saying "augustus is filling those needs") ... paulo did.

Paulo really implied she was sleeping with Augustus for no other reason than to degrade her so like... he fucked around and found out lmao

Paulo: Wow... I just got slapped by Lucy. This is the greatest moment of my sad life!