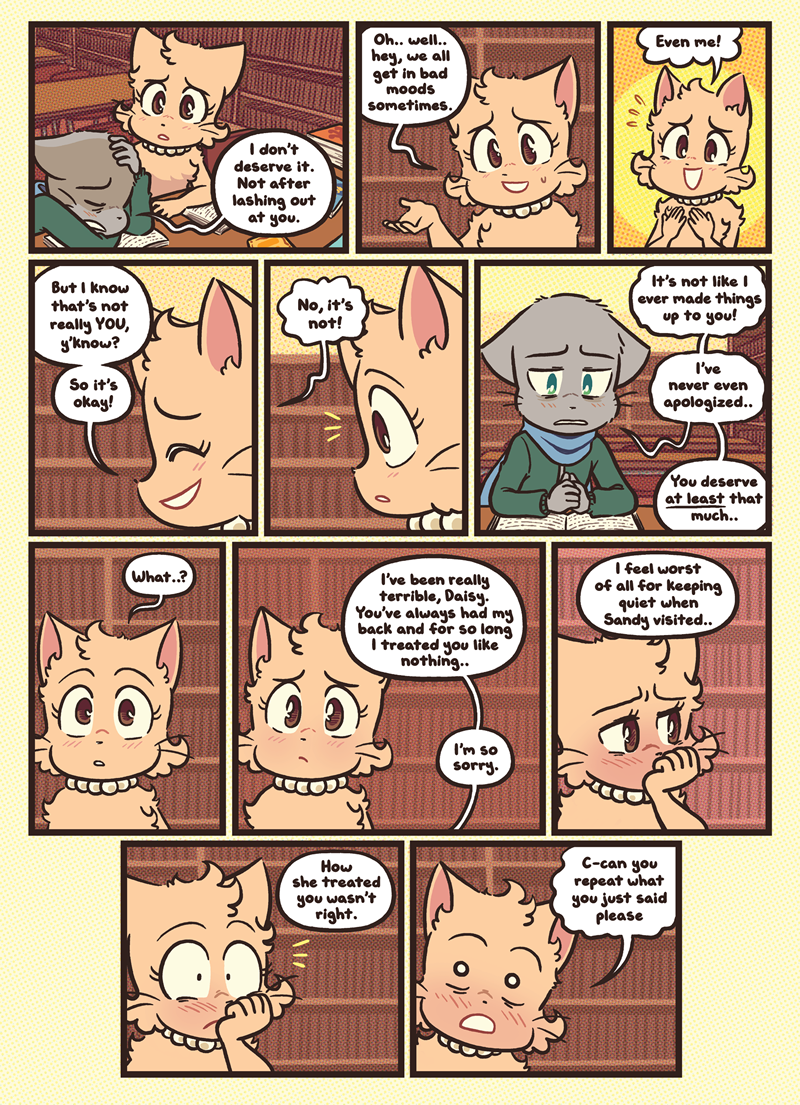 Omg he’s not being a dick about it!!!

"one more time, into the microphone please"

Louder for those in the back 👏

Mike is trying to be better, growth is good.

I'm just hoping this isn't like Lucy's moments of trying to make up for things before her attempt though.

Daisy: can you tell me again how sandy was wrong pls <3

Oooo is that a hint that Sandy was purposely acting like she didn't remember Daisy?

I hope so, cuz that'd make Sandy's character more interesting and driven than just "forgetful, ignorant model". Which she's become.. I want her to be purposefully mean !!! Lol we know so little about her even after the big reveal imo

This is why I could never truly jump aboard the “hate Sandy” train. We don’t really know her and even the things she’s done wrong weren’t really portrayed as spiteful.

I dunno, I always thought Daisy’s behavior over Sandy was a little silly… “not remembering a friend you had in preschool” is not necessarily a sign of being selfish and rude lol

Except they were friends in 3rd grade, the same as Sandy and Mike, not preschool, and she remembers Mike just fine. Also, she stayed at Daisy's house and had sleepovers with her.

Haha I’m just saying, when I was in high school I was not thinking much about friends I had in third grade that I had not seen or talked to since then, and probably would not recognize them if I saw them on the street! Of Sandy’s crimes, it’s definitely one of the least damning to me lol

He said the forbidden name

oh, this is amazing to see. For once Mike is doing something right!

He's starting to grow, good for him. Now just keep at it.

Oh boy. This might not end the way Mike thinks it will... he's probably not gotten out of the reflexive "defend sandy at all costs" immature love mindset, even when he's the one criticizing her. This might go VERY badly.

Doubtful with everything thats recently happened. Especially with how this page is set up for him to do a 180 mid conversation would be really weird. His eyes are opening and he's really down about it so if anything he'll unjustly accuse Sandy for things that might not fully be her fault (if there is case where that fits ofc)

Mike I am SO PROUD that you are owning up to what was wrong. I just hope in the end everyone is okay 🥺 even if there is no pairs just be fucken happy and okay with eachother 😭

excited for the next page :eyes:

He lost someone who was closest to him already, I think he’s slowly realizing he needs to shape up before he loses even more people in his life

Daisy: You're apologizing to me? Hell must've froze over!

Can't wait for the next page!!

Not bad, Mike. Admitting you're wrong isn't easy, but it's a good start.

What Sandy did wrong wasn't "not immediately recognizing an old friend"... it was implying she didn't recognize Daisy because she doesn't remember being friends with someone fat. "You've really... grown!" There's hesitation here, I suspect she was going to say something with even less tact before re-routing, and Daisy's a combination of insightful and insecure. Clearly, Sandy does remember a skinny Daisy enough to make that comparison. You can take the route Abbey did afterwards that Sandy meant nothing by it... but Sandy hurts people without realizing it all the time, it doesn't excuse her. Being in the industry she is, she should know it's sensitive. Instead, Sandy sets herself apart, doesn't say another word to Daisy, then leaves with Mike. We now know Mike noticed, and he knows Sandy enough to have a read on her. He ignored it. He ignored it when Sandy said Paulo just flips burgers too. He prioritized Sandy for too long despite so much. I'm happy to see him make repairs.