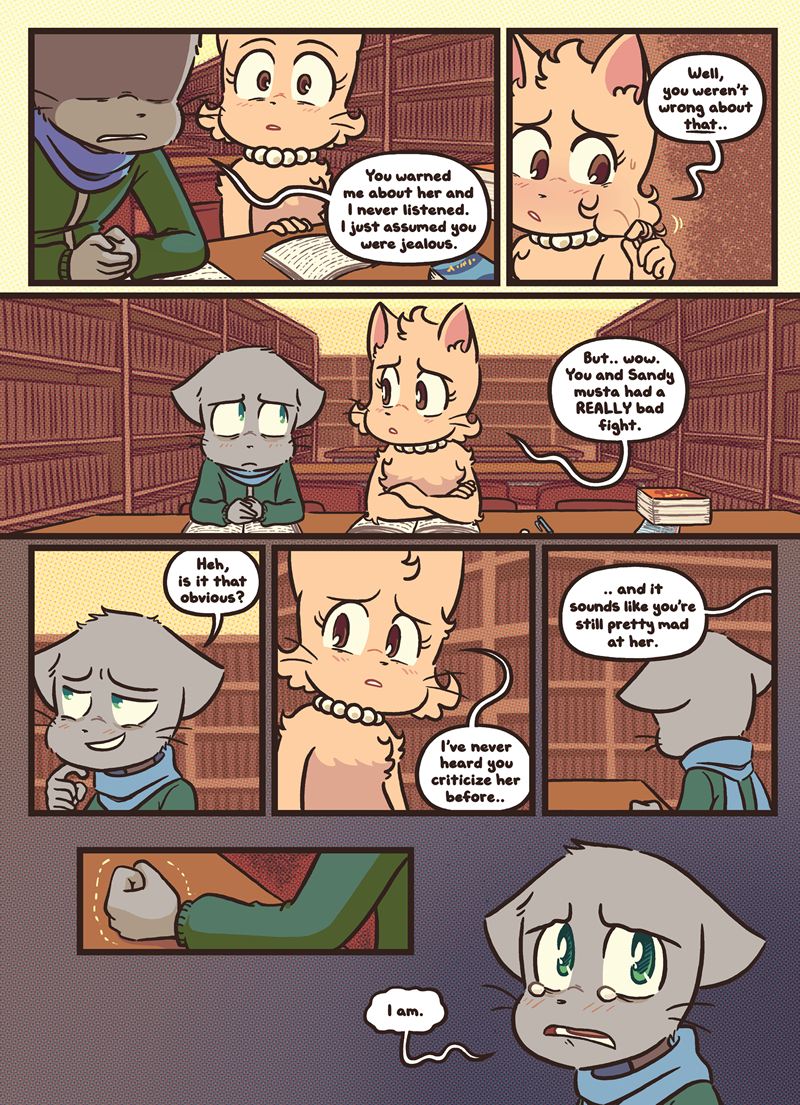 Veronica: GET OVER IT

Let out the feelings Mike. We've all seen what bottling them up will do to people in this comic

Oooo the beans are about to be spilled

It's good that he's opening up to someone who is as compassionate as Daisy. Paulo and everyone else are nice but they are blunt. He needs someone who is genuinely pleasant but not a pushover either. He can't lash out at someone who pushes the right buttons.

Seeing the bonus sketch pages showing that Sandy was essentially being groomed by her older male coworker made me realize that she is a victim here. It also makes me feel a lot less sympathetic to Mike when he ran over to make out with Lucy and say things like “The scarf was ALWAYS about your eyes…” minutes after his fight with Sandy.

I feel if anything Mike should be upset with himself and not Sandy; he let her walk all over him for years.

Wait what?? Sketches? Where's the one you're talking about??

I had that feeling that it was grooming she was dealing with but thought there was no official confirmation/denial of it.

Where were these sketches posted?

I’m not sure if it’s in BCI and I don’t have them saved, but I’m certain at one point we were shown at least the original message exchange between Sandy and Mike. How after he had left and met Lucy she was freaking out over him not answering

If I recall correctly; Sandy had been desperately trying to call Mike and she almost feared he’d harmed himself. She also mentions that she revealed the situation to her mother and she FREAKED OUT; saying something along the lines of “I had a FEELING something was up!” And the text conversation implied that it was inappropriate because of the age.

Did I just make this up? Now I’m second guessing myself. I

It happened and they exist but not anywhere you can find them now, pretty sure. Posted briefly on discord. The grooming thing wasn't really a point made in it, and I don't think we should talk about it if no one else can visit/revisit it now. That makes it too easy to just say things and not have to point to anything, yknow? I just wanted you to know you didn't make it up.

Thank you! I thought perhaps it was archived but seeing other people's reactions and then me not being able to find it, seems it was only up for a brief moment of time. Thank you for the clarification! I won't discuss it further!

In all fairness to Mike, he tried to convince Sandy to stay with him despite her "cheating" but she refused multiple times. He's a victim too in this. He really thought their relationship was over with no chance of redemption and was extremely heart broken over it. He didn't go "run over" to make-out with Lucy. However, i do feel bad for Sandy in that she is in an industry and forces young models to grow up too fast and put them in very questionable situations. How she treated Mike wasn't right no matter how you cut it though.

She didn't treat him right, I'm not excusing that! What I was just trying to point out about Mike is that his reaction to seeing Lucy was that of someone who had been harboring feelings for her for a while; I mean, we can pull a FRIENDS meme and say "They were on a BREAK!" but the fact that he went from breaking up with Sandy to confessing his feelings for Lucy in what felt like somewhere between 30 minutes to an hour just makes me feel like he's being a bit of a hypocrite.

It wasn't a sketch if I remember, it was a text wall we got to see about the conversation. It should be somewhere on the Patreon page

There is a post from August 18th on the Patron that's a discarded script of Mike and Sandy's phone call in Eternal Flame from the discord.

Daisy was jealous in more than one way but her criticism was def based on her own experience of being dropped by Sandy once Daisy wasn't useful to her anymore. Granted, they were single-digit age at the time it happened. Though, when Daisy first made mention of that, it had only been a few years after Sandy left, when they were in 7th or 8th grade.

Still, glad to see they're communicating and being open & honest with each other as friends should.

Oooh seems more like Mike was talking about how Sandy drops people when she finds someone more useful. I didn't realize Mike could have made that connection yet. Daisy's being very kind and mature here.. and Mike is being truly vulnerable. I like it.

BCB continues to warm my heart.