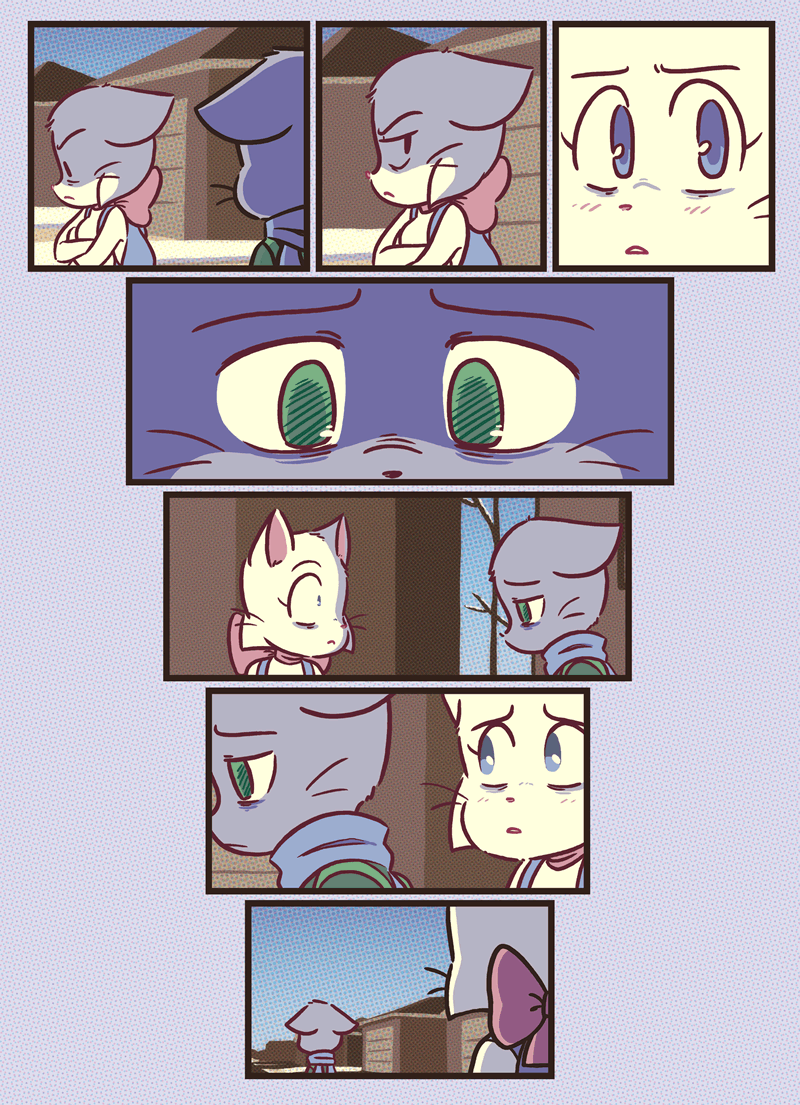 Lucy don't make sad eyes at him😤he's not worth it

WTF ITS LIKE THEY CANT STOP BEING DRAWN TO EACH OTHER

☹️ I know this feeling so well oh no

Huh. Okay, then, let's see how this goes.

Same comment I made in the discord, she recognizes those dead eyes.

Oh yeah, those dead eyes. I don't know if she saw herself when she was in that same state of mind. But her change of posture, and the shrinking panels, really shows it strikes a chord with her.

Lucy: The batteries in your old Pokemon games died, did they?

Clock based events will no longer occur lol

LUCY THIS IS NOT YOUR PROBLEM

I mean Lucy’s just empathetic like a good person ❤️ BUT STABD YOUR GROUND GIRL, DONT BE HIS REBOUND

Coming soon in a future chapter:

Lani: Everybody. Sit down. I have an announcement. Mike will no longer be attending this school.

Lucy. Please don't. It's nice you care. But he did this to himself. Focus on you. <3

I just want to give him a hug

Why do I feel that mike might do something really stupid soon!

I really hope things get better for both Mike and Lucy

Oh damn….what’s with his eyes? Feels like deja vu….

I kind of wonder what the passage of time here is because I have a theory that Paulo went to Mike shortly after the movies with the poor Dyxlesic cat to finally snap the final straw on breaking Mike out of his passive, doormat bullshit. I really think the punchline in the last page of “Featured Attraction” was more than just a punchline and is a bread crumb into something else important. Taeshi definitely loves to sprinkle humor into her comic, but sometimes they’re more than just a goofy joke and I feel like this is one of those times.

Perhaps Paulo wailing on Mike finally made him stand up for himself but breaking up with Sandy took a much higher toll than anticipated. Maybe she kept testing his mettle like she did in the discard script phone call to the point because she really did appreciate Mike for being there before she was rich and famous but at this point it was too late and the damage she did to Mike for not being honest with him sooner is just too much. She was desperate to keep it going but Paulos advice to Mike won over. Maybe it got to the point where Mike had to Double Down on the intention of breaking up with her and finally moving on with his life and Paulo telling him that “putting yourself first every once in a while” was key in finally letting her go, once and for all.

That being said, maybe Mike is so distraught now because of the mental toll it took to finally crawl out of that relationship, kicking and screaming, and is having second doubts and can’t repair it because it’s M I K E. Maybe Mike even finally confessed his own dishonesty with Sandy and mentioned that he still cared deeply for Lucy all this time. Hell, maybe him finally confessing that he straight up was still in love with Lucy despite all reason blew things up and that’s a part of him that will never go away. MAYBE MIKE MATURED SOME. :O

Disclaimer: all of this is just speculation and in good fun. Don’t take anything i say as gospel please! :’D

This is a great analysis, thank you for sharing it. If Paulo fled the movie theater with the need to give Mike a "swirlie," aka telling him to stand up for himself, then that makes complete sense. Paulo feeling the need to defend Mike right NOW is so him. It's one of those things that reads as only momentary confusion and then realization when it's all published.

Sometimes I feel like I unnecessarily give myself anxiety by obsessively pouncing on each update the moment it goes up. It's good writing and a good story that doesn't have to justify itself on every page.

Thank you! :D I love this comic because the creators encourage us to look between the lines so coming up with all sorts of theories as to what may lie ahead is a huge draw for me to this comic. It's so fun to see what other people come up with too. ^^